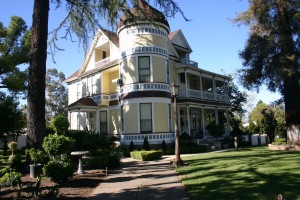 The Victorian, particularly the Queen Anne Victorian like the one here, is my absolute favorite design. Can’t afford one, don’t want to have to renovate or maintain one, but oh, how I’d love to explore one!

Do you know what was going on when these beauties were being built? Everything!

This was the generation of the Industrial Revolution–steam engines, diesel engines, planes, trains, and automobiles! Construction used a variety of new materials and new building methods and tools to make sure these architectural wonders withstood the test of time. And they have. May need a new paint job and some serious modernizing, but they can be found in almost every town dating back to the turn of the 20th century.

The Queen Anne isn’t the only type of Victorian there is. We’ve got yer Gothic, yer Italianate, yer folk style, shingle style, stick style. Seriously, if you’re writing SteamPunk, you need to explore these. Gothic is especially popular for SteamPunk and other genres.

My favorite, though, is the QA. Built in England long before its popularity in America, the architectural design marked the Queen Anne Movement— a period in the late 19th century that celebrated her reign in the 18th century, even though the style had nothing to do with the good mother of the empire, but dated back to the late Tudor era. 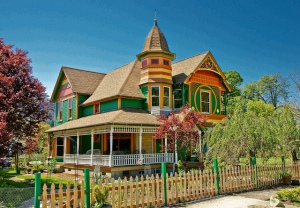 Here in America, it got dolled up far better than what they did with it in jolly ol’ England–or perhaps the Brits would consider it gaudy, who knows? The American version comes with plenty of decorative woodwork (“gingerbread trim”) and the signature round tower. The color schemes are almost always fun. Two or three–or more–complementary or contrasting hues work together for the big Look at me! effect. And I always look. 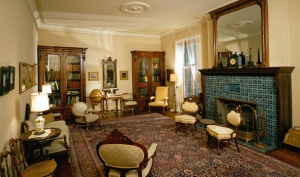 The interiors tend to be formal, with lots of woodwork and elaborate wallpaper designs. Those who renovate these homes, though, tend to choose subtler, more muted colors, God bless ’em. Doesn’t make the room less showy, but does add some class.

I’m totally a fan of this style of home. Loud and brazen with garish colors and trim matching the taste of the avant garde and the neaveau riche, or muted and tasteful, stately, like the established, high-brow class–doesn’t matter, I love them all.

But why am I writing about them? Because Emily Taylor buys a fix’er-upper Queen Anne in The Cat Lady’s Secret, and, oh, the troubles she faces!

Tune in to my Facebook page (and “like” it while you’re there!) for more pics and fun facts about Victorian homes–and many more fun things that’ll be going on in the next few weeks.  Know why? 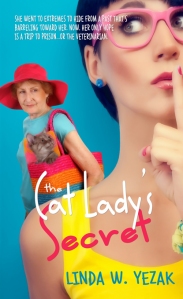 And I’ll be doing all sorts of fun stuff between now and then, including the “Cat in a Coffee Cup Giveaway” on June 12th, where I’ll be giving away a new coffee mug every twenty-five minutes for two hours! Y’all’ve gotta come play with me then. It’s gonna be a blast!

What do Queen Anne Victorians and a crazy cat lady have in common? Come see! http://wp.me/peDqs-1EY #CatLadysSecret #architecture #ChriFic

8 Responses to Ah, the Victorian!