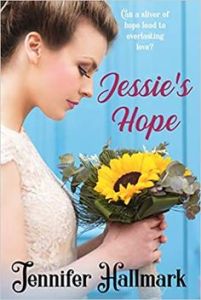 Jennifer Hallmark’s book, Jessie’s Hope, isn’t just her debut novel, it’s also a 2020 Selah Award finalist–which says a lot about the quality of the story and its writing. I thoroughly enjoyed it.

Jessie’s Hope is more than a romance. In fact, I don’t think I’d call it a romance at all, although it definitely has romantic elements in it. For instance, it has a wonderful tear-jerker of an HEA ending. But there are two many POVs in the novel to be called a romance, and the emphasis of the story isn’t on Jessie and her boyfriend Matt.

But Jessie’s Hope concentrates on forgiveness from several levels and through several characters. Jessie herself struggles with forgiveness throughout the novel—trying to forgive her father of abandonment, primarily, but also her old enemy from high school, her beloved grandfather, and at one point, Matt himself. Jennifer explores other angles of forgiveness through Jessie’s grandfather and her enemy-turned-friend.

Life is messy, and everyone has someone they must forgive–or must ask forgiveness from. Jennifer’s debut novel explores the subject from multiple angles with beautiful depth and sensitivity. Definitely recommending this one.

2 Responses to Jessie’s Hope: a Review