Early Review of The Simulacrum! 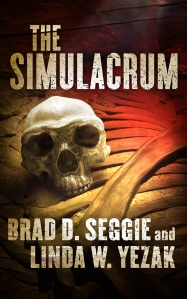 Brad submitted The Simulacrum for review and just got it back yesterday:

A fast-paced thriller with an intriguing scientific mystery.

Mary Dillard is an ambitious Washington, D.C., woman on the cusp of attaining her dream job, Director of Development at the National Academy of Sciences, when her uncle Dr. Wayne Oakford is murdered at his home. The police call it an open-and-shut case of a burglary gone wrong, but Mary and the reader know a larger conspiracy led to the crime.

The second chapter reveals the killer’s identity, so the real mystery that drives Seggie and Yezak’s book centers on Oakford’s controversial scientific findings. Both the killer and the higher-ups in the science community wanted Oakford out of the way after he found “Paluxy Man,” a fossilized human skeleton that may have lived alongside the dinosaurs, providing strong evidence against evolution.

Mary has only days to discover whether her uncle truly falsified his findings and why someone wanted him dead. She enlists the help of Gunnar Schofield, who doesn’t “do” cellphones. He rides a Harley instead of taking planes and is still recovering from his wife’s death. The pairing of Mary and Gunnar is almost as far-fetched as Oakford’s research.

Readers paying attention will see plenty of similarities to Dan Brown’s The Da Vinci Code, that blockbuster page-turner. This book moves at a similarly brisk pace, with short chapters, snappy dialogue and great chemistry between the two leads as they jet from one destination to another, one revelation to the next, one precarious bit of danger after the other.

Fans of hard science might be irritated with the book’s central concept, but this thriller still delivers.

I love that last line–yes, fans of hard science won’t like having their logic used against them, won’t enjoy seeing evolutionary “facts” explode, won’t appreciate seeing alternatives to the theory of evolution introduced so convincingly. That was the point.

Author/Freelance Editor/Speaker (writing and editing topics).
View all posts by Linda W. Yezak →
This entry was posted in Promotion/Publicity/Marketing, The Simulacrum and tagged Brad Seggie, Evolution, Paluxy Man, The Simulacrum. Bookmark the permalink.

10 Responses to Early Review of The Simulacrum!