The dénouement, that place near the end of the novel where loose ends are tied, secrets are revealed, and all nontangential activities blend into the plot with head-smacking logic. Nothing new is introduced here. This is where the fog clears and every silver thread you’ve woven into your novel shines with clarity. This is the time of kudos and awards. The bad guys are punished, and the good guy prepares to ride off into the sunset with the girl.

The concept holds true even if the novel doesn’t have a bright, sunny ending. Novels in general move toward something, the achievement of some goal, and dark novels are no different. Main characters still should have traveled through their story arc, loose ends need to be tied, a hint to the future must be evident, particularly if the novel is one in a series. 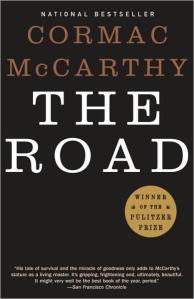 One of the darkest books I’ve ever read is The Road, by Cormac McCarthy. The characters in this masterfully written postapocalyptic book have only two goals during the entire story: staying alive and going south. The reader doesn’t know where their travel will take them, what lays ahead in the magic land of “south,” but we continue reading with the hopes they’ll get there. Whether they’ll find a place that hasn’t been destroyed is doubtful. It’s clear the two will live forever in a gray world.

Throughout the novel we watch the heart-wrenching change in one of the main characters, known only as “the boy.” At the beginning, the boy is a typical child, full of hope and wonder and curiosity. He still has the need to play and be lighthearted. But he witnesses so many horrors as they drift southward, childish charm drains out of him. He no longer peppers his father with journalistic questions, no longer skips along the way, no longer shows signs of holding even a frayed thread of hope. The excruciatingly few good points on their journey are far too short for the little man to recapture his exuberance.

In the dénouement, which I can reveal without ruining the story, they arrive south. The reader still doesn’t know where they are and the barren, ashen landscape hasn’t changed, but judging from the people there, the boy will be safe. He may not be happier, he may still never see a bird or flower, he may still live a life that consists of scavenging for food, but he will be safe. 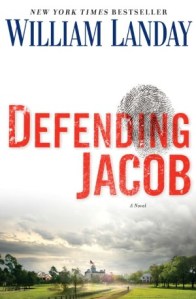 Defending Jacob, by William Landay, is a study in psychology, law, and family dynamics. This exquisitely written novel explores what happens when an assistant district attorney discovers his son is accused of a brutal murder. The effects on the family of the accusation and arrest, the wait for trial and the trial itself are presented entirely through the father’s POV. Landay keeps the questions coming at the reader with rapid-fire precision, and they aren’t limited to “did the boy do it,” although that’s a big one.

Anyone who knows anything about courtroom procedure has to wonder about one thread, one “writer’s trick” Landay relies on in telling his story: the presentation of the father’s grand jury testimony. As the novel progresses, this testimony becomes more and more bizarre–not because of its content, but because it’s happening at all.

The novel is told “after the fact,” and the boy’s trial and the father’s testimony have already occurred, but at different times, something the reader doesn’t realize until it becomes apparent that the father’s time in the witness seat couldn’t possibly relate to the boy’s trial. Grand juries are assembled before trial to see if the DA has enough evidence to indict the accused. As the novel goes along, the boy’s trial comes to its fruition, but the grand jury testimony still continues. As the reader passes the three-quarter point in the novel, he has all sorts of ideas in his head as to why this is occurring. For me, I had several ideas, each of them feasible, and none of them matching what was revealed in the dénouement–which I can’t share with you. Definitely a spoiler.

Whether the ending for Defending Jacob is dark depends on the reader’s interpretation of one line written four pages from the end: “It was the last time I was ever in that courthouse.” There could be several reasons the main character never entered again, and not all of them are good. But whichever reason the reader chooses, the MC’s life is forever changed for the worse, so perhaps the best way to word this isn’t whether the ending is dark–it is. The question left to the reader is “how dark?” The reader determines the shade of black.

In both of these novels, there was one constant thread that led to the dénouement. In The Road, that thread is the trip south. The beginning of the end of the novel is marked by their arrival. Once they reach “south,” any other question the author presents during their trek is answered. But reaching that goal doesn’t promise “happily ever after” for the characters. The only hope is that the boy will finally be safe.

With Defending Jacob, the thread is the grand jury testimony. As the novel progresses, the testimony becomes more and more obviously out of place. In the dénouement, Landay reveals whom the state is seeking to indict and answers all the questions that arose from that one thread. The rest of the questions raised during the novel aren’t overtly answered, but all the tools the reader needs to find the answers are available to him–many of which are head-smackers.

Dark novels don’t have to have bright endings, but they do have to contain the same major components in the dénouement as lighter novels. According to Jeff Gerke (“4 Ways to Round Out Your Climax,” Writers Digest, Nov/Dec. 2011), to complete your novel you must:

As long as you’ve done these four things, you can end your novel as dark as you and the reader would like.

6 Responses to The Dark Dénouement