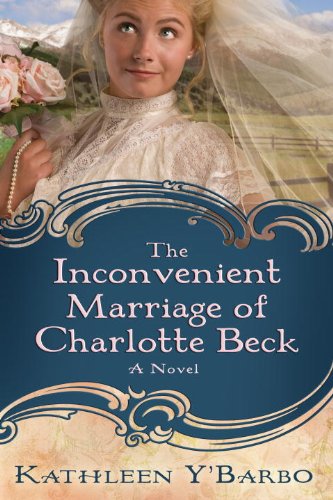 I recently finished Kathleen Y’Barbo’s The Inconvenient Marriage of Charlotte Beck. That one was just too fun—classic Y’Barbo. She can come up with the cutest plots, not to mention fun characters! Charlotte had me laughing loud enough to raise MSB’s eyebrows.

Charlotte wants to go to college and become a partner in her father’s business in a time when such things were unheard of in women. Alex wants to study the stars, but must save his crumbling estate with finances he does not have. Neither of them want to marry the other. Charlotte, especially, will go to extremes to avoid getting married. But when her father makes an offer neither can refuse, that’s exactly what happens.

The frequent cameo appearances of Buffalo Bill Cody were fun too. I like the idea of tossing in a character from our past and having him interact with the fictional ones. Cody’s influence on Charlotte early in the book made for some fun scenes. Though, it wasn’t like Charlotte needed that much help to get herself in trouble!

If you like to laugh, grab  The Inconvenient Marriage of Charlotte Beck . I give it a full five coffee cups—or five full coffee cups!