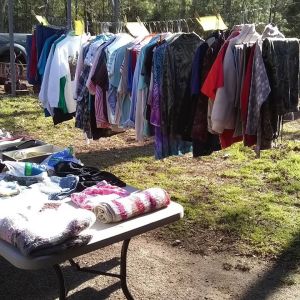 This past weekend, MSB and I held the second and—yea!—last garage sale for a while. Our intent was to get rid of twenty years’ worth of stuff we didn’t use/need anymore so that when we move, we can fill the new house with more stuff we won’t need or use.

Well, that’s not entirely true, but it’s the way it works sometimes, isn’t it? We want to declutter our lives, yet we fill up with more clutter. Part of living in a materialistic world, I suppose.

For this garage sale, I broke down and got rid of clothes that didn’t fit me anymore—meaning I got rid of the daydream of losing that much weight on purpose and keeping it off. Besides, I’m older now, and if I lost that much, I’d probably look sickly. But it hurt selling things for a few dollars that cost me much more. Some of it I never got to wear. Folks walked away with some great deals, I tell you. When the Crohn’s disease flared up in late 2011, I lost a lot of weight and, of course, went shopping. I didn’t have anything that small anymore, having gotten rid of all my little sizes when the doctors brought the disease under control several years before, and I thought I’d be small for a while. Always had been before. But by early 2012, when the drugs finally worked and I got well again, I went from size little to size nonyabusiness almost overnight, and many of the clothes I bought I never got to wear. Watching them go to strangers made me a little sad.

Of course, we got rid of some things we were glad to see gone and others we didn’t expect to sell. For instance, we had an old record maker (recording to vinyl LPs and 45s) that had been carelessly stored on the farm for far too long. Most of its knobs were missing and its case was seriously battered, but it still had both arms—the only way we could tell it was a recorder and not just a player. I’m still amazed that it was one of the first things to go.

Then, we got rid of some things we shouldn’t have. Like the metal fold-up chairs. They looked awful and were incredibly uncomfortable, and I intend to replace them with something better, but until I do, I’m without a desk chair. Head-slap! What was I thinking?

And MSB sold the tiller. Since we aren’t moving back to the farm after all, he figured he wouldn’t need it. Right now, the first Wednesday after the sale, he’s wishing he had it back. He went out to our little garden yesterday and puttered around for a while. We have no clue how long we’re going to be here in this house, and he was wishing to have the garden to work in again. But it’s too big for him to crank back to life using just a hoe. He wants his tiller back. Poor guy.

Isn’t that always the way?

But we made a lot of sales, have some cash stashed away to apply to the new house. And we are ecstatic that the event is over.

Showings for our house are slowing down considerably, and we’re still here. No telling when this place will sell. We had one contract, but the buyers’ definition of “as is” differed considerably from ours, and the contract fell through. So, as happy as I am that we’ll get to see another East Texas spring—truly the loveliest in the state!—I’m anxious to see how the Lord is going to handle this. The other house back in my hometown—the one we have a contract on, contingent upon our selling this one—is still sitting vacant, waiting for us. We both believe it’s the one God wants for us, and we’ve both been wrong about what God wants before. We’re counting down the days to see whether we were right this time. Adventures in faith.