Working with an Editor, guest post by Naomi Musch

I was one of the ones who got to read Naomi’s newest release, Mist O’ver the Voyageur, and let me tell you–I was totally engrossed. Naomi knows how to tell a tale! But she also knows how to explain what goes on behind the scenes when getting a book ready for publication~~~

When the editor asks for rewrites
HOW HARD CAN IT BE?

It must have been thirty years ago when I first heard the century old quote by Sir Arthur Quiller-Couch, “Murder your darlings.” Nowadays we settle for killing them softly. We self-edit and rewrite until our works shine, and then we send them off prayerfully for publication. Ultimately, if the manuscript is accepted, we get our copy back from the editor with changes to make. How shocked we are when our editor has slashed our lovely lines or marked up an entire section of the book with the flippant request (or so our wounded hearts think) to “Rewrite (or cut) this section.” Sometimes it’s not a big deal. We see how their suggestion will make the book tighter, stronger. Other times, we wag our heads and whine to the cat, “What? What? Whyyyy?”

Changes are often negotiable, but frequently they are not. Occasionally they must be made in order to fit the publisher’s line as was the case with my new novel, Mist O’er the Voyageur. When the acquiring editor expressed her interest in my novel and willingness to present it to the publishing board, she said, “I’d really like to see the story end here,” meaning about a third of the way in from the original lengthy ending.

I swallowed hard. “You would?”

“Yes, because…” She went on to explain her reasoning.

I couldn’t argue. I could only consider. Was this something I was willing to do for the book to be published? Or, should I take my chances with a different publisher or different line? Thankfully, she gave me time to consider and pray. Pray I did, and even though I was still skeptical about the monstrous rewrites I was facing—because it wasn’t as simple as cutting the ending. It would take a total re-crafting along with other internal changes—I felt God prodding me to say yes, and I burrowed into the challenge of those rewrites. (He always seems to be that Dad who pushes me out of my comfort zone.)

I was glad I said yes, but it wasn’t over once I cut nearly 20,000 words and changed the ending. Then came the regular rounds of internal edits. I’ve worked with a number of editors over the years. Some were easy on me, some a tad more difficult, but all had the best intentions for my work. After all, their names would be attached to the end product too. And it was hard. It’s almost always been hard.

So why am I telling you this?

Perhaps because you might be that author who hasn’t published yet, but you live in that hope. You dream of it. Maybe for you I’m saying this so you don’t face any illusions over the arc of the task involved. Once you sign the contract, the real work begins.

Maybe you’re a reader only and happy with that. Forget the writing. It’s not for you. Maybe, though, you’ll appreciate your favorite books and authors even more, now that you know how they’ve sweated pure bloody angst to bring you their best. If you find a typo or some small error, perhaps you’ll cut them a tiny bit of slack, knowing that it was probably a minor oversight in much larger editing picture. Maybe you’ll even toss a prayer out for them.

If you’re an experienced author, maybe you’ll be encouraged to know you’re not alone in a boat occasionally floating on a sea of frustration or needing to paddle forward with determination. Maybe you’ll be pleased that God assigned you this challenge to grow you in your faith and craft.

And for the editor reading, maybe you’ll be reminded of ways to steer your author with precision—and occasionally delicacy—because we’re all in this hard effort together, to bring out the best a story can be. An honest author will thank you for it.

And now I’m back to self-edits. I have a book to turn in soon.

THIS IS THE LAST CHANCE to enter my Rafflecopter drawing for my Grand Prize Package Giveaway in two more days. 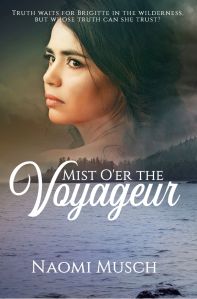 After her aunt’s death, Métis woman Brigitte Marchal finds herself alone in Montreal. Uninterested in the convent and desperate to flee a loathsome suitor, she disguises herself as a young man to travel west by voyageurs’ brigade in search of her long-absent, fur-trader father. But her inexperience and disguise don’t hide her for long.

René Dufour yields to the unwelcome position of shielding Brigitte, but he cannot hide her identity forever. Keeping her safe while meeting his North West Company obligations and honoring his family promises may prove to be more disquieting to his heart than he imagined.

As Brigitte adjusts to the voyageur life on Lake Superior, she struggles to justify the faith she grew up in with the mysticism around her, but greater still is the conflict her heart must settle over who to trust in this rugged, unfamiliar country.

Naomi is an award-winning author who crafts her stories from the pristine north woods of Wisconsin, where she and her husband Jeff live as epically as God allows near the families of their five adult children. She enjoys roaming around on the farm, snacking out of the garden, relaxing in her vintage camper, and loving on her passel of grandchildren. Naomi is a member of the American Christian Fiction Writers, the Wisconsin Writers’ Association, and the Lake Superior Writers. Though she has written in a variety of venues, her great love is historical fiction. Her new novel, Mist O’er the Voyageur, just released from Lighthouse Publishing of the Carolinas’ Smitten imprint.

Naomi would love to connect with you around the web.

2 Responses to Working with an Editor, guest post by Naomi Musch