Lynnette Bonner is a lovely person and an amazing cover designer. She designed the covers for my Circle Bar Ranch series, and people are always commenting on how attractive they are.

But she’s also a prolific author. She has a new one coming out later this month On Eagle’s Wings. I’m excited to share her interview. Be sure to catch the offer at the end!

What genre(s) do you write and why?

All the stories I write are stories that share Truths from God’s Word. For me, it is important to use the gifts He gave me to return what measure of glory I can to Him. So under the main banner of “Christian,” I’m published in historical romance and contemporary romance. I also have a fantasy story that I’ve been working on for years, but no published fantasies yet.

What started your writing career?

I grew up overseas without electricity or TV, so I was a reader from my very early years. I loved to immerse myself in story and sometimes wouldn’t reemerge until hours later. Eventually my love of story turned the bend to me beginning to pen my own stories. Or I would read a book and think “it could have been so much better if they’d done it this way.” I started several books, but never finished one until I was doing some research about the town I lived in at the time and found some tidbits from history that I knew had to be told. That research turned into my first published novel, Rocky Mountain Oasis.

You were born and raised in Africa?! Did that have any kind of influence on you as a writer?

For sure! I often tell my kids that I wish anyone who interacted in politics in our country would be required to first live for 2 years in an African village in the middle of nowhere. But we aren’t here to talk about politics (thank goodness!)

When you’ve seen people living in truly abject poverty and watched them live overcoming joy-filled lives despite their circumstances, you can’t help but be changed. When your best friends growing up lived in a mud and brick home and slept each night on a grass mat on a hard cement floor, yet were more than happy to share their meal of corn porridge and vegetables, it can’t help but change you.

I hope I am a more giving person because of my upbringing. I hope I am less judgmental of poverty. I hope I am a writer who shows that no matter your circumstances in life, there is One who can give you joy beyond measure.

One story I wrote, that I likely wouldn’t have written were it not for my upbringing is the Sonnets of the Spice Isle serialization. The research for that book was heartbreaking, even though some of it I knew to expect.

What is it about historical fiction that appeals to you as an author?

I love writing about a simpler time, and yet showing that people of those times struggled with many of the same sins and issues that we face today. I’ve sometimes gotten negative reviews because readers say a sin I presented in the story would have never happened “back in those days.” I don’t believe that. I believe sin has tripped people up since Eve ate the fruit, since Cain killed Abel, since David—a man after God’s own heart—stole another man’s wife and had that man murdered to try and cover it up.

What is the craziest thing you’ve done in the name of research?

Ha! Well…one of my stories required my heroine to be tied up, hand and foot, and gagged. I needed to accurately be able to write what that felt like and how she might escape from that, so I had my husband tie me up. 🙂 The look on my son’s face when he walked in to find me tied up on the floor with his father standing over me while we both laughed like ninnies…that was priceless.

What do you find the most challenging part of being a writer?

I always want to include a message of Truth in my stories. Nailing down exactly which one truth I want to bring out in each story can be a struggle. There is often more I would like to share, but the more you try to pack in the more it gets watered down, so picking just one message is important. I think that’s often my hardest task.

Me: Yep. I agree that’s the hardest task. So many to choose from, so much need in the world to hear His word!

So now, the special offer:

One commenter will receive a free eBook copy of On Eagles’ Wings when it becomes available.

You can preorder On Eagles’ Wings here: http://www.lynnettebonner.com/OEW

Take the next stagecoach to Wyldhaven,
where the coffee’s perked hot,
the sheriff likes his apple pie fresh from the oven,
and adventure invariably waits just around the next river bend. 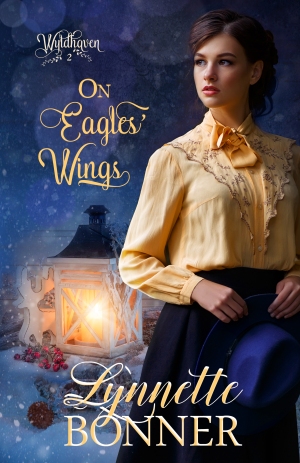 Boardinghouse owner Dixie Pottinger has done her best to avoid the attractive Dr. Griffin. But now that her mother-in-law is sick and he’s going to be coming around more to care for her, Dixie knows she must inform him about her past. She works up her courage and feels great relief when she finally tells Dr. Griffin that she’s a married woman…maybe…if her husband, Steven Pottinger, survived the bullet put into him before she fled.

Dr. Flynn Griffin can’t believe he’s been having feelings for a married woman! His honor requires that he immediately put those feelings to rest. As for the man who had abused Dixie so badly that she retreated into hiding… If he was still alive, he better never show up in Wyldhaven, because Flynn had plenty of ideas on how to teach the man lessons in gentlemanly conduct.

Little does Flynn know that Steven Pottinger is about to become his patient. Gravely injured by an accidental gunshot, Steven lies on the brink of eternity. Never in all his life has Flynn been tempted to break his Hippocratic Oath.