Shadow of the Storm: a Review 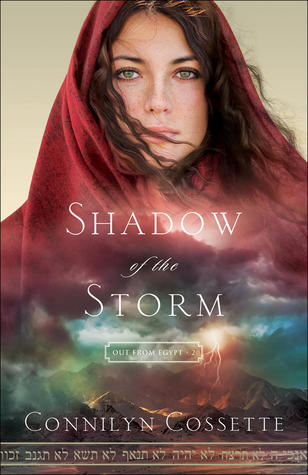 If you love Biblical Historicals, you will love Connilyn Cossette’s Shadow of the Storm. This is the second of her Out From Egypt series, a book I won from Bethany House in a Goodreads giveaway. I intend to read the entire series. Connilyn is an amazing writer.

The story takes place after the Hebrews have been sent away from Egypt, after God parts the sea. It’s in the time of manna from Heaven and the cloud-pillar Guide. The Hebrews are living at the foot of Mount Sinai.

The novel follows Shira in her journey to healing and calling. Connilyn did a marvelous job of presenting her inner conflict along with the multifacetedness of her character. She’s strong, but doesn’t realize it. But, when we see her in action, we the readers get to see just how strong she is.

I loved Connilyn’s ability to put us in the Hebrew camps and provide a realistic interpretation of the people’s reaction to having God’s presence with them continually. As readers, we get to experience Connilyn’s vivid imagination as she brings life to biblical events.

The story follows Shira, but Dvorah plays a part in what happens to her. Dvorah is a damaged woman with very little room for love in her heart for anyone other than her child. Ayal, the man who loves Shira, is no less important to the story, and Reva, who challenges Shira to follow her calling as a midwife, also plays a huge role in shaping whom Shira will become by the end.

If I have a complaint at all about this wonderful novel, it’s a minor one: The author would tell what she was about to show, and, once, she took time out to show what we already knew.

Through Dvorah’s POV scenes, the author would tell us what is about to happen; then, through Shira, she would show it happening. This lessened the element of surprise and suspense because we knew what to expect and who the culprit was. Dvorah’s motives could have been illustrated in other ways, and her POV scenes could have been eliminated entirely without damaging the novel. The same could be said of the flashback scene. This scene illustrated the event in Egypt that had broken Shira, but through the author’s expert writing we already knew it. Illustrating the first such event was unnecessary.

1 Response to Shadow of the Storm: a Review