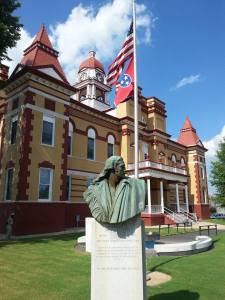 If you’re ever driving down Highway 45W in (north) West Tennessee and see the sign for Trenton, don’t take the bypass. A short jaunt through town will lead you to the square where you’ll be greeted by an unusual sight. Trenton is the governmental seat of Gibson County, Tennessee. But don’t expect to see a red-brick, white-columned courthouse. Boring!

Trenton’s courthouse was completed in 1901, in “high” Victorian style with multi-colored brickwork, turrets, and a cupola. At first glance…well, you might want to pull into a parking spot and gape. I lived in Trenton as an adolescent, and I still want to stop and look.

There are other “cute” things about Trenton, Tennessee, like the world’s largest collection of teapots. Yes, you read that right. And these are no ordinary teapots, but Veilleuses-theieres (pronounced vay-uhz tay-air). They’re night-light teapots. Here’s a link if you’re interested: A tea-riffic place to live! They even have a festival every spring, complete with a teapot-lighting.

Oh, and by the way, as you cruise through town, you might want to pay attention to your speed. The limit is 31-miles-per-hour. I’m not sure how strict they are about it, since I’ve never been stopped there.

I have been asked (several times) why I chose Trenton as the location for my Kinsman Redeemer series. I think we actually lived there less than a year when I was in sixth grade. But it was a lovely town and the courthouse tends to hook you. I think I need to write a scene there in the third installment.

I chose Trenton because of its familiar location, I still have family there, and I didn’t want to use the actual location where my grandmother lived. That’s a few miles away in a smaller town. Not that I’m using anyone who ever lived, but many of my characters may…well, resemble those who once lived there.

The original story in Annabelle’s Ruth follows the pattern of the Biblical story of Ruth. Annabelle’s daughter-in-law, Connie Cross, is my main character. Connie is Annabelle’s Ruth. She follows her mother-in-law back to her home in Trenton, Tennessee. In Sutter’s Landing, the story continues—and, I have to confess, it’s a bit more romantic.

A long time ago, my seventeen-year-old mother left her home and family in Seattle, Washington to live with my dad’s family in West Tennessee. So I blended reality with fantasy and stirred in a heaping helping of Biblical background. It was a joy to write, because I was able to draw from my precious memories of family and their neighbors. And research always includes stopping in to visit the cousins—a definite perk!

The era and setting for the Kinsman Redeemer series is important, because of racial bias during those days. It was quite prevalent in the south, but I don’t really get down and gritty about it, it’s just a fact of life. The attitudes of many of my characters show what “normal” life, customs, and beliefs were during those days. Things may well get a little ugly before it’s over, but I can tell you this, those who practice true faith in Jesus will never turn their backs on their brothers and sisters, no matter what shade their skin, or how bulky their wallet.

Small-town stories fascinate me, but they’re a bit of a challenge to write. There are so many characters, you have to be careful not to confuse the reader. I’ll be the first to admit, I didn’t always succeed. Maybe I should’ve re-read Cheaper by the Dozen before writing this series.

Sutter’s Landing, Book 2 Kinsman Redeemer series should be available for pre-order in mid-May, ahead of an early to mid-June release.

Here’s the back cover blurb:

Still reeling from tragic losses, Connie and Annabelle Cross face life with their signature humor and grace, until fresh hope arrives on their doorstep.

In early spring of 1955, Annabelle Cross and her daughter-in-law, Connie have nearly made it through the first winter on their own. Then West Tennessee and much of the south endures one of the worst floods in history. Many of their neighbors endure losses due to the flooding, but Annabelle and Connie sit tight on dry ground.

As Spring gives way to summer, Annabelle begins to dread Connie’s upcoming wedding and removal to Sutter’s Landing. Though she’s happy to note the growing affection between Alton Wade and her daughter-in-law, their marriage means Annabelle will be on her own for the first time in her life.

Connie’s doubts increase when Alton’s bigoted brother Jensen uses every opportunity to drive a wedge between them. Is she doing the right thing? Did she move too quickly? Unexpected summer visitors and a possible new neighbor provide diversion and fresh hope.

Betty Thomason Owens is a multi-published, award-winning author of historical fiction, and fantasy-adventure. She is an active member of American Christian Fiction Writers (ACFW), where she leads a critique group, and serves as vice-president/secretary of the Louisville area group. She’s a mentor, assisting other writers, and a co-founder of a blog dedicated to inspiring writers. She also serves on the planning committee of the Kentucky Christian Writers Conference.

Her writing credits include a 20’s era romance, Amelia’s Legacy (2014), Carlotta’s Legacy (2016) Books 1 & 2, Legacy Series from Write Integrity Press (WIP), and the Grace-Award-winning Annabelle’s Ruth (2015), and Sutter’s Landing (2017), Books 1 & 2, Kinsman Redeemer Series, also from WIP. She has two fantasy-adventure novels, The Lady of the Haven and A Gathering of Eagles, in a second edition published by Sign of the Whale BooksTM, an imprint of Olivia Kimbrell PressTM.