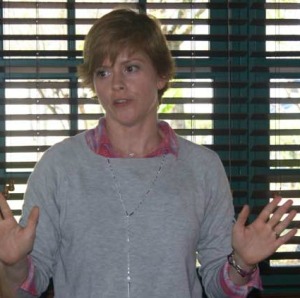 A couple of months ago, my writers group in The Woodlands, Texas, hosted Carla Hoch, an expert in weapons and self-defense. She was fascinating to watch and listen to, and she definitely knows her stuff. Her blog, FightWrite.net, is all about fights and fighting.

One of the things she talked about was how fight scenes are presented in novels—especially novels written by folks who’ve never been in a fight. She gave us some illustrations of things she’d read in others’ manuscripts and asked us if we understood why what they’d written wouldn’t work. Sometimes I couldn’t see what was wrong until she explained; other times, the gaffs were blaringly obvious.

But with everything she said, she always came back to this: Picture in your mind what you’re writing on the page.

Watch your characters act out their battle, moves and counter moves, actions and reactions. Take time through the scene to visualize everything going on. Just because something sounds cool doesn’t mean it works.

This idea of visualizing what you write applies to virtually everything you put on the page, and it requires an alertness to what you’ve already written. If you’ve made it a point to tell your reader that the characters are standing ten feet apart, you can’t afterward illustrate them in hand-to-hand combat or a loving embrace without first having them close the distance.

Picture what your characters are wearing and understand how the garments can limit motion. An example Carla gave was the 17th century barmaid with a knife strapped to her leg. If she has to scrounge through yards of skirt to find that knife, it’s not going to be very useful to her.

When you’re creating a scene, you have more to think about than just the characters. You also have to think about what would be in that scene if it were actually occurring in real life. Life doesn’t occur in a vacuum. Remembering this can help you to add detail to a scene and enhance the sense of reality. It can also help prevent logistical problems that make your work an example editors and others use as how not to do things.

So, we have clothes, setting, others populating the scene. What else would you consider while you write? What would affect your character’s actions and reactions?

Picture your scene. Watch it in action.

7 Responses to Watch What You’re Doing