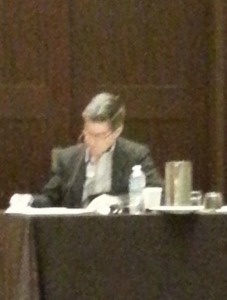 I took this blurry picture in Nashville. See why I don’t do it often?

If you ever have an opportunity to go to a session with New York literary agent Donald Maass, let me suggest you tote at least one manuscript idea and something with which to take copious notes.

I don’t take notes on the computer. I tend to pay more attention to the mistakes I make while typing than I do the lecture, so I had a fat, three-subject, spiral notebook. My notes took up the first third of it.

I made notes of ways I could improve Skydiving to Love–which I’d thought was finished and ready to publish. But how could I pass up all these great ideas?

I made notes on things I should’ve done in my published novels and didn’t. Sigh.

Maass walked us through some questions intended to make us reach deeper into the character’s psyche, basically by making us dig deeper into our own. What are we afraid to write because it’s too intense and personal? Write that. Write it because it’s most relatable, because it’ll help you overcome the baggage, because your readers will realize they’re not alone.

Because, if you don’t write about it (providing the pragmatic response here), your story is shallow.

Let me share a truth about myself: I hate introspection. I never come out the good guy. I tend to skip the “what about you?” parts in devotionals, because too much introspection makes me focus on my sins rather than my redemption, and in general wrecks my day.

But, just as I did in Tosca Lee’s course last year, I dug deep and answered the “what about you?” question.

Like other authors, I write about relationships and the need for and the giving of forgiveness. Actually, that’s a sweet way of putting it. To write the truest statement I know, as ordered by Maass and Hemingway, I had to scratch the veneer off the simple “forgiveness” statement to reveal what I really write about.

Sounds strange for a light-hearted romance/women’s fiction writer to say, doesn’t it? But my books tend to be comedy/drama, because they reveal the simple truth—my truth—that relationships hurt.

All of them hurt. Mother/daughter, Daddy/daughter, friend/friend, man/woman, husband/wife. If there is someone in your life, that someone—at one time or another—will hurt you. And every time they do, you have to forgive them or let the wound fester. How easy it is to forgive depends on how often they hurt you and how deeply, how they react once they discover they’ve hurt you, and how they rate in importance to you. But the fact that you will get hurt is a universal truth.

And as long as it’s true, I’ll have a gazillion story lines.

For Kayla in Kayla’s Challenge, the painful relationship is between her and her controlling parents.

Following Maass’s direction again: “Who in the story would be the least likely to reveal the truth?” 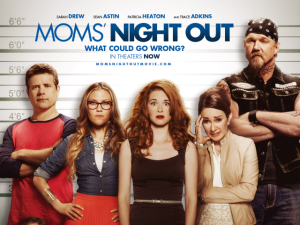 I call this the “Trace Adkins” moment. In Moms’ Night Out, Trace played a rough-looking biker. His appearances were few and far between, but he was the one who delivered the spiritual truth to the main character.

The “Trace Adkins” character in Kayla’s Challenge will hit Kayla with the truth when she least expects it. As a matter of fact, Kayla will have several truths to deal with, each delivered in different ways. But mainly, she’ll have to examine the commandment to honor her parents in the light of the new revelation that she allows herself to be controlled. And she’ll have to find the balance between the two.

Donald Maass taught the course using techniques introduced in his upcoming The Emotional Craft of Fiction. Maass has always been exceptional when it comes to making us dig deep, to testing us and our stories, so I’m anxious to get this book (releases December 30).

The ideas I got from just taking his course are invaluable. I’ll talk about them more next week, but if you ever get a chance to study under him, grab it.

I’ve been a fan of his for years, so naturally, my biggest daydream is writing something he would be willing to represent as my agent. I’m not there yet, but I keep trying.

14 Responses to Studying Under Maass (Part 1)