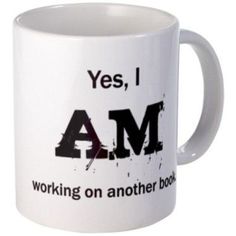 Remember this mug from last Friday? I want it. It serves a dual purpose–it would announce to whomever may care that I’m writing again and, if I’m not writing again, it would serve as a constant reminder that I’m supposed to be.

I finally arrived at the “writing again” stage. Months ago, I finished Skydiving to Love, a novella to be released in a collection with other authors (Pamela S. Meyers, Jessica Ferguson, and Angela Breidenbach) called The Bucket List Dare, and I haven’t written anything more substantial than a blog post since.

I thought, after trying Katie’s Outlining Your Novel workbook, that I would outline again. I was excited about my experiment based on her instruction at first — and I still highly recommend it — but I still land squarely in the “hybrid” hole. I can’t shake doing things the way I’ve always done them. My way works for me.

Here’s a list of things I already knew about Ride to the Altar by last year, when I wrote its cover copy to put in the back of The Final Ride as a tease (and also to let my readers know that The Final Ride isn’t final):

These are the things I’ve had to come up with:

I’ve been mulling all this over and trying to flesh it out for a year. I knew I’d be introducing a new character — Patricia’s mother (yet another Yankee) — but I also knew that I’ve played the fish-out-of-water theme to death. I have to come up with something different. And I have to come up with an excellent reason she didn’t want Patricia to marry Talon. Have to decide how Patricia reacts to the reason, how she reacts to her mother, how she grows/changes due to her relationship with her mother.

Not long ago, when Mom was in getting her eyes tested, I got hit with a barrage of ideas, which is always the case when I’m away from home and the only thing I have to write on is a little 4″ x 5″ notebook with only three pages remaining. Believe me, I made the most of those three pages.

Everything gelled after that. I know what’s going to happen and where and when and why and how and who all it’s going to affect and how it’ll affect them and why. It’s all in my head. It took me over a year to get it there, but it’s there now. Months and months of scrabbling around in my mind for the answers to the “journalistic” questions. Doesn’t mean I won’t chase rabbits, but at least I know my story well enough not to follow those little furry butts too far away from the plot.

That’s the process I went through when writing Give the Lady a Ride and The Final Ride. It’s the same process I started for The Cat Lady’s Secret, but as some tragedies hit our family while I was writing it, I tended to chase too many rabbits down some pretty dark holes. The results don’t match the intentions, but it’s still a great book.

Then there’s The Simulacrum — in a league of its own. Brad outlined it, I wrote it. Doesn’t count.

The “hybrid” part of all this comes while I’m writing. In my head, I know what’s going to happen in my novel, but getting everything down on paper is a different animal entirely. As I write, I come up with ideas about the next scene, the one after, and so on, and I stop writing long enough to do a quick outline of them, including character reactions, etc. Sometimes my characters do and say things that take me by surprise, so — if I want to use that little surprise — I have to “interview” them to figure out where it came from. Everything has to be accounted for, so if a character does something that’s contrary to their established personality, I have to figure out why and how to make it fit based on information I’ve already provided about that character. So, yes, I do character bios, but primarily as I go along, not before I know who they are.

So there you go: my “method,” if you want to call it that. And finally, part 1 of my method — the part about getting an idea fleshed out enough to actually start writing — is complete.

Now, I can proudly say I’m writing another novel!