On Chili and Gumbo and Writing in Genre 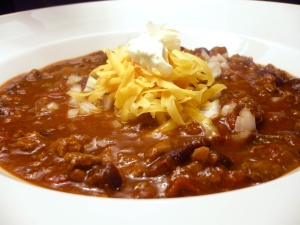 I forgot to write a post for Monday. I don’t know why. I’m late today, but this time I do know why–I can’t think what to write about. The only thing that comes to mind is the Chili Cook-off we had at church last Sunday night. Not particularly writerly, but still . . .

The saying goes like this: Real chili doesn’t have beans. And any real Texan is supposed to know that. But MSB and I, both born and raised in Texas, put beans in our chili. So does that makes us artificial Texans? Nah.

I heard someone on the Food Network give out a chili recipe that had very little to do with actual chili. I mean, she called for ground turkey–seriously?–and still called it chili. Another recipe called for ground turkey, butternut squash, and–get this–chia seeds. Like chuckwagons on the cattle trails came equipped with squash and chia seeds. But the most bizarre? A side dish of quinoa and pine nuts.

These dishes are not chili. They should be called something else.

With all the odd recipes out there, the debate over whether or not chili includes beans seems moot. I believe the recipe varies depending on what was handy on the cattle trail in the 1800s. Beef, onions, spices, chili peppers were basic. Got leftover beans? Throw them in. Leftover corn? Take it off the cob and slip it in there. Both of these were available. Cheese and sour cream are iffy, but, okay. I can deal with that. I think expedience determined the ingredients, but I don’t think ground turkey, butternut squash, or pine nuts were part of cattle trail food.

My brother-in-law was teasing me one day years ago. He asked if I knew how to make Cajun gumbo. Well, of course I do. We live close enough to the Louisiana border that I know several Cajun recipes. He ordered me to list the ingredients, and I did–but when I said “tomatoes,” he jabbed a finger at me. “No! Cajun gumbo does not have tomatoes!”

I did some research, and (much as I hate to admit it), he’s right. At least to the extent I have discovered, Cajuns tend not to have veggies beyond what’s called the trinity (onion, celery, bell peppers). Creole cooking includes veggies. Even though I believe the gumbo recipe varies, depending on expedience and availability, just like the chili recipe, I have been calling my gumbo “Creole” gumbo ever since.

Something dawned on me while I was typing all this . . .

My publisher rejected The Final Ride because it isn’t driven by the romance, and I can’t claim it to be a romance novel, because the romance conflict isn’t central to it. They’re absolutely right. The Final Ride is a sequel to Give the Lady a Ride, following Talon and Patricia as their relationship grows. The romance between the two is an ingredient in it, but the story doesn’t follow the formula–recipe–for a true romance.

Genre fiction is like that. There are certain components that must be present to be labeled as that genre, and if the story doesn’t follow the basic recipe, it must be called something else. Some of the ingredients can be different, but the major components must be present.

Despite the writer’s natural rebellion against being pigeon-holed, this is not a bad thing. It’s a necessary marketing tool. When a reader goes looking for a mystery, he wants a mystery, not some literary conundrum posing as a mystery.

I didn’t follow the recipe, but then, Give the Lady a Ride, my award-winning debut novel, also didn’t follow the recipe. It received a very beautiful, very encouraging rejection letter from Harlequin, which boiled down to “Loved it, but it’s not romance”–same kind of letter The Final Ride received. All this leaves me with an identity crisis, because now I don’t know what to call my books.

It’s like that weird “chili” recipe. There comes a point when the ingredients are so different, the final dish should be called something else–but what would one call a “chili” with butternut squash and chia seeds?

What should I call my stories? I’m thinking “Contemporary Women’s Fiction.” I’ll leave it at that.

Now–beans in chili? Tomatoes in gumbo? Let the debate begin . . .

15 Responses to On Chili and Gumbo and Writing in Genre