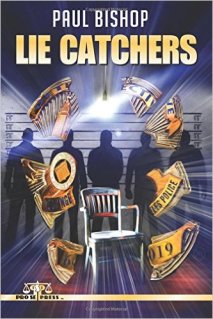 A friend recommended Lie Catchers and told me about the interesting twist–the unusual abilities the main characters possess that make them good at their jobs, but miserable in life. These aren’t super-human powers, they’re oddities of the human condition that make for fascinating characteristics to give a couple of cops.

Detective Jane Randall has synesthesia, “a sensation produced in one modality when a stimulus is applied to another modality, as when the hearing of a certain sound induces the visualization of a certain color.” In her case, she sees color streamers attached to the spoken word. She knows the color of confusion, sincerity, lies.

Detective Ray Pagan is an “empath”–someone with exceptional abilities to be empathetic, an acute ability to feel what another is feeling, and some of the things he feels in his line of work are hard to shake off.

Between the two of them, they solve crimes and catch criminals.

The idea fascinated me, and I expected to see something highly gripping and unique. I  was a bit disappointed.

The plot itself is a good one: two children are kidnapped simultaneously, in seemingly unrelated crimes, one from the home of a mortuary owner and the other from a rap-music producer. The two detectives rely on their skills and their unusual abilities to solve the case.

I liked both of the main characters. Jane, dubbed Calamity Jane, is the wounded, scarred hero who has a lot to overcome. Ray has already conquered his ghosts–or at least learned to live with them. All but one, anyway. Ray has created a haven for special people, and without her permission, has dumped Jane into it. She resents his gall, but loves the haven. Frankly, so would I.

The author, Paul Bishop, was with the LA police department for 35 years and was “twice honored as Detective of the Year,” according to his Amazon bio, so he provides a lot of detail pertaining to interrogation and the laws governing it. If you write Police Procedurals, read this one with a notepad nearby.

And, if you write Police Procedurals, don’t do it like Bishop did.

I’m not sure whether Bishop didn’t trust his descriptive abilities or his readers’ abilities to understand what he just presented, but he was forever explaining the obvious. It got to be annoying after a while.

Truth is, Bishop presented his scenes convincingly. He did a great job of it, and I understood everything that happened. Then, as I said, he turned around and explained it all to me.

Reminds me of the greatest rule of all in writing: RUE. Resist the Urge to Explain.

If you’re not sure the reader will understand your scene, write it better. If you’ve written it as well as you possibly can, get a beta reader to let you know whether it works. If it works, leave it alone, if it doesn’t, rewrite it. But never assume your reader isn’t bright enough to catch on to what you’ve written.

And always write to your smartest, most critical reader. You please that one, you’ll please ’em all.

Author/Freelance Editor/Speaker (writing and editing topics).
View all posts by Linda W. Yezak →
This entry was posted in Writing. Bookmark the permalink.

2 Responses to Review of Lie Catchers