A Review: Night Side of Dark 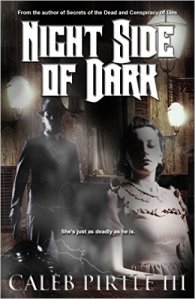 I met Caleb Pirtle III at the ETBU Conference in Marshall, TX, this year, and what a treasure that was! He has written numerous books and three teleplays for network TV, including “Gambler 5: Playing for Keeps,” the fifth in CBS’s series based on the song “The Gambler” by Kenny Rogers. First thing I did when I got home was to grab his newest, Night Side of Dark.

The early chapters of this WWII noir illustrate the fractured mind of a man whose brain the government had scrambled too many times by the crude use of electro-therapy, but the novel goes full circle, and the bizarre events the main character, Ambrose Lincoln, experiences early in the novel explain the end of the novel.

The structure of the story itself has a form of brilliance that still boggles my mind, but the novel is a hard read. I’ve read only one other noir–The Black Dahlia–and though this one is entirely different, it’s still a tough read. Definitive of the genre, everything is bleak in the novel. Everyone experiences an intense sense of hopelessness–or, on the other hand, they consider death an elusive friend they’d welcome with open arms if he’d just come around and save them from their misery.

As for writing style, Caleb has a tendency to hop heads and intrude as the author in such a way that doesn’t really qualify as omniscient (see “A Study in Omniscient POV,” parts 1 and 2), but more in the style of Tom Clancy’s novels (and I’m still a huge Clancy fan). He employs the techniques of one-sentence paragraphs and dichotomies that, I admit, got on my nerves after a while because of their frequent use, though they did make for fast reading and plenty of white space on the page. He also tip-toes along the border of “melodramatic.”

But Caleb has a gift of driving deep into the reader’s imagination the mood, the insanity, the darkness surrounding the events and characters in his book. When you consider the era and the setting he writes of, “melodramatic” isn’t the word that best fits. “Realistic” is. And because of the beautifully crafted intensity, all other violations of the “writing rules” are easily forgiven.

Ambrose Lincoln, despite his fractured mind, is sent on a mission to recover a painting that’s rumored to have the mystical ability to allow escape from this world into another through a gate illuminated by a streak of lightning. If the rumor–or myth–is true, and Hitler gets his hands on the artwork, he can escape prosecution on this side of heaven and retribution on the other side. Everyone is after this piece–Germans, Brits, Russians, Americans–all for different reasons. Lincoln must get to it first.

The story itself is fascinating, but for the writer who studies the works of other authors, this novel provides incredible examples of mood and scene setting, characterization, and complex plotting. It definitely won’t be everyone’s cup of tea, but many of the techniques employed can be translated successfully into other genres. If you’re one who studies the works of others to enhance your own style, I recommend this one. Caleb is a Christian, so the content is generally safe for most Christian readers. Those who are super-sensitive may have trouble with the violence, but the violence isn’t gratuitous, nor is it offensively gory. Considering the setting–during the end of WWII, when the Nazis know they’re losing and they’ve already destroyed everything and everyone who crossed their path–the portrayal seems appropriate.