I cut my authorial teeth on writing plays for use in the church. They ran the gambit from 90-second to 5-minute sermon-starters to full length musicals. For the short sermon-starters, there was a problem and the pastor’s sermon supplied the remedy. The full-length Easter and Christmas musicals followed Jesus’ life.

My first novel was a Biblical fiction in which I strung together a bunch of scenes from Jesus’ life, interspersed with the fictional characters. There was no conflict, other than the Pharisees wanting to crucify Jesus. I figured that was enough.

I slid that first manuscript under my bed, never to see the light of day again. I turned to contemporary fiction and let my funny bone come out to play. However, I still lacked enough conflict. My crit partners (you know the ones: Attila the Holmes, Genghis Griep, and Ludwig von Frankenpen) ripped it apart.

“More conflict!” was the verdict.

But I write light-hearted Southern fiction.

“You still need conflict. Anne of Green Gables had a story question that kept it going. Would Anne be able to avoid her usual high jinks and get adopted? While not the usual conflict, it provided tension needed to carry the story forward. You need more!”

Okay, okay. I heard. I began to do deeper character interviews in which I discovered the secrets about my characters’ past. Once I found their deepest need or darkest secret, I had the basis for conflict. What was the worst thing that could happen to her/him? Do it and then go one worse.

Suspense, mystery, and adventure genres have built-in conflict by nature of the genre. They are plot driven, meaning the events cause the protagonist to make decisions.

But in character driven fiction (the character’s decision causes certain events to happen, driving the plot forward), the conflict will stem from the characters’ motivation, which is based on that lie they believe about themselves.

These things, the lie and motivation, are found within the character’s backstory. That secret. That devastating childhood event colors their personality and their worldview. These are from where you draw the story conflict.

If it matters to the character, if it violates or goes in direct opposition to their motivation, it causes great conflict.

For instance, in Chapel SpringsRevival, my protagonist, Claire, wants respect. Her lie is that it’s all her fault. She lives to prove that wrong. But she’s her own worst enemy, trying so hard, she forgets to stop and think before she moves or says anything. She charges headlong into trouble, and usually ends up in a mess, further compounding her dilemma.

In Rich in Love, by Lindi Peterson, the heroine, raised on the mission field, wants nothing to do with foreign missions. She’ll serve God right here in Atlanta, thank you very much. The hero, with whom she’s fallen head over heels in love, has been called … you guessed it—to be a foreign missionary.

So remember, conflict comes from within, in a character-driven novel. It comes from the characters’ past, their hurts, their fears—their backstory. That backstory may never make it in the book (and probably shouldn’t), but you’ll glean so much from it, you’ll have built-in conflict. 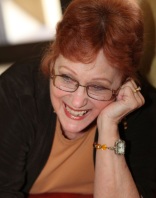 President of the award-winning literary site, Novel Rocket, Ane resides in Suwanee, GA, with her artist husband, her chef son, and two dogs of Biblical proportion.

A mail-order bride, a town overrun with tourists, and illegal art ~

can Claire and Chapel Springs survive?

With the success of her Operation Marriage Revival, life is good for Claire Bennett. That is until the mayor’s brother blabs a secret: Claire’s nineteen-year-old son, Wes, has married a Brazilian mail order bride—one who is eight years older than him. When Claire tries to welcome her new daughter-in-law, she’s ridiculed, rebuffed, and rejected. Loving this girl is like hugging a prickly cactus. When family members begin to choose sides, will Claire and her family survive her son’s marriage?

Lydia Smith is happily living alone and running her spa—then the widow on the hill becomes a blushing bride. Along with her new marriage, she has a dream to expand her business by adding guest rooms. Things are going according to plan. That is, until her groom’s adult son moves in—on everything. Will her dream survive her stepson?

From the first sighting of a country music star in Claire’s gallery, The Painted Loon, to the visit of a Hollywood diva, Chapel Springs is inundated with stargazers, causing lifelong residents to flee the area. When her best friends, Patsy and Nathan, put their house on the market, Claire is forced to do something or lose the closest thing to a sister she’s got. With her son’s future at stake and the town looking to her to solve their problems, it’s Claire who needs a guardian angel.