The Cliché’s Day in Court

Andrea Merrell is my guest today. You’re going to enjoy her post!

Poor little cliché—old as dirt and worth his weight in gold, yet he gets no respect and we avoid him like the plague.

Without him, we can’t keep up with the Joneses, shop till we drop, or bring home the bacon. That’s how the cookie crumbles if you put two and two together.

No need to fly off the handle. Go the whole nine yards and see if the grass is really greener on the other side. Don’t jump from the frying pan into the fire; just wake up and smell the coffee.

I know what you’re thinking—I’m barking up the wrong tree with a bee in my bonnet and ants in my pants. You might want me to bite my tongue and stop rocking the boat. No way, José! You can lead a horse to water, but you can’t make him stop using clichés.

The critics say it’s easy as pie—don’t touch a cliché with a ten-foot pole. I say, let’s not throw the baby out with the bathwater. Sometimes there’s just no better way to say it, so why reinvent the wheel? Clichés are comfortable old shoes and if the shoe fits, wear it. After all, there are thousands of these little guys. They don’t grow on trees, but they’re more fun than a barrel of monkeys. They’ve mastered the school of hard knocks and have come out smelling like a rose, yet in the publishing world they fall flatter than a pancake.

Certainly, the cliché is overused. Agents, editors, publishers—they all say the same thing, but here’s the rub. Some of these proponents of “ban the cliché” cannot finish a complete thought without throwing in at least one or two, especially at writers’ conferences where clichés tumble hand over fist. Go figure.

So where does the buck stop? The powers that be tell us if we don’t play by the rules, we’ll pay through the nose. After all, the pen is mightier than the cliché. We must think outside the box and put our best foot forward. Otherwise, we’ll be up the creek without a paddle—or a publisher.

This could be a piece of cake and one for the books, but I won’t hold my breath until pigs fly. Maybe clichés are not your cup of tea, but they stand out like a sore thumb. After all, nice clichés always finish last. Can I get an amen?

If we stick to our guns, we can kill two clichés with one stone. I won’t count my chickens before they hatch or judge a book by its cover. It’s like pulling teeth to have a meeting of the minds, but better late than never. Is that clear as mud? If not, I’ll eat my hat.

Maybe you think I can’t see the forest for the trees. No sweat. It might cost me an arm and a leg, but it’s no skin off my nose. The bottom line seems to be: it’s okay to talk in clichés, but not write with them. Have I hit the nail on the head?

Andrea Merrell is an author, editor, workshop leader, and mentor. She has a passion to encourage other writers, helping them sharpen their skills.

Andrea has written material for ladies’ groups, marriage retreats, skits, websites and brochures. She has been published online and in numerous anthologies. Her first book, Murder of a Manuscript: Writing and Editing Tips to Keep Your Book Out of the Editorial Graveyard, is now available on Amazon.

Her love of words keeps her eyes fastened on Webster’s and fingers glued to the keyboard, combining creative writing with editing.

Her newest release, Praying for the Prodigal, is available on Amazon. 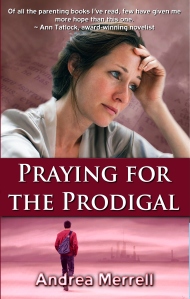 28 Responses to The Cliché’s Day in Court