Monday, I introduced the idea that I applied Chris Vogler‘s structure paradigm to City Slickers because that was the movie that kept scrolling through my head as I listened to his course at the ACFW Conference in St. Louis. I covered the first act and its components: the Ordinary World, the Call to Adventure and subsequent Refusal of the Call, Meeting the Mentor (in the first incident, it was Barbara, Mitch’s wife), and Crossing the Threshold.

By the end of Act 2A, we’d had the Ordeal–the battle between the heroes and the enemies, that ultimately resulted in everyone leaving the scene but our three main characters, Mitch, Ed, and Phil. That was the big turning point, but it wasn’t the climax. It’s the beginning of the big test–what everything has been building up to.

So, what’s next in the paradigm?

(You can click on the picture to make it larger.)

We’re moving toward the Reward and the Road Back, the last elements in Act 2B, then we head to Act 3, toward home and the character’s Ordinary World. 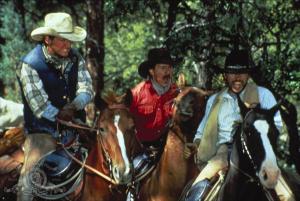 In the movie, we didn’t get to go through Mitch’s mental process that made him change his mind from going back to the ranch house with the other city slickers and decide to join his buddies in herding the cattle. He showed up on the scene, had some pithy comment about his return, and off they went. I doubt novelists could get away with that, but it worked in the movie.

We’ve had some bared-soul moments with Ed and Phil, but it’s safe to say Mitch isn’t there yet. All he has to go on is Curly’s hint about One Thing, and he doesn’t have a clue what that one thing is. Still, there’s a camaraderie and a sense of well-being among the three buddies. The going is easy, the conversation casual–Mitch teaches Phil how to set his VCR. Having the friends all together, unified toward a common goal, is the Reward they earned for surviving the Ordeal.

They don’t get to enjoy it long, though. They’re facing The Road Back.

One of the characters Mr. Vogler lists is the Gatekeeper. As the name implies, the gatekeeper’s task is to keep folks “out,” keep them from achieving their goals. In City Slickers, the Gatekeeper is the river–a live, writhing thing, swollen from rain and ready to kill.

In a nail biting climax, our heroes get the herd across, but the calf is caught in the current. Mitch dives in to save it, and the river carries them both away. Phil and Ed make a frantic effort to save them.

Spoiler Alert! Our heroes conquer the river! They save the calf, then push the herd onward to their destination. Cue Bonanza theme as they ride down toward an adoring crowd. Accolades all around from their fellow city slickers, who had chosen not to carry on with the herd, and from the ranch owners.

They’ve all enjoyed a Resurrection. Phil admits his divorce allows him a “do-over,” a chance to get it right. He leaves the movie with a new love interest. Ed decides he likes fidelity after all and chooses to start a family with his lingerie-model wife, a sure sign his fear of commitment has been conquered.

And Mitch? He found out what that “One Thing” is: his family. He Returns with the Elixir–his smile . . . and Norman.