I’ve gotten lazy, or haven’t had enough time to write for my blog–or just haven’t had much to write about. Pick one. They’re all true to some degree. Anyway, I decided to share one of my old posts with my new readers, let y’all get to know me better, though I don’t think this is my good side . . . 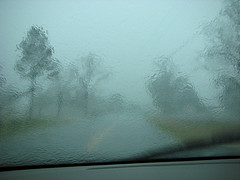 I don’t like to drive in the rain. The harder it falls, the more I hate it. Keep in mind that dislike is not the same as inability. I can do it, I just don’t like it. At all.

I don’t like not being able to see out my windshield even for that split second before the wipers clear it.

Water sluices off the road, threatening to take me with it. I hate that.

The guy who races past me because he trusts his rain tires? Don’t like him. Some day, he’s gonna get us all killed.

But what I discovered this past week is that when I’m following an eighteen-wheeler, I go beyond hatred of driving in the rain. I slide into panic. And if there is anyone behind me, I break out in a sweat.

Last Wednesday, as I drove for my monthly visit with Mom, the rain was falling hard–like whiskey down a drunk’s throat. The only thing I could see ahead of me was a trucker’s tail lights, and my eyes fixed on them like they were the salvation of the world. The rig was moving appropriately slowly, and I was as comfortable as I could get with my white-knuckle grip on the steering wheel.

Soon, the sky cleared a bit and the rain stopped, but my car was getting hammered by the road wash the truck kicked up. I slowed down to let him get ahead of me a bit and took my first breath in roughly twenty minutes. Then, a 1968 rusty-blue Chevy pickup with what must’ve been a hot new NASCAR Truck Series motor zoomed up on me and threatened to sit on my bumper if I didn’t move. At the same time, the eighteen-wheeler decided to slow down. I was trapped between them.

The big-rig’s spray surrounded me like a cone of water. I couldn’t see anything but his red lights and the NASCAR wannabe behind me–and I swear that Chevy driver was twirling a mustache suitable for a 1920s silent film.

I started driving like an idiot, watching the yellow line in the road, looking for signs that I could pass, but I couldn’t see around the truck to tell if the road was clear of on-coming traffic. I’d go farther and farther into the wrong lane trying to get clearance to pass. There were several times I could have, but I just couldn’t see well enough to commit. I wove in and out of my lane and literally lived up to the reputation of female drivers.

The thought of pulling over to the shoulder and letting Mr. Chevy pass me crossed my mind, but my mind wasn’t functioning at that moment. I was terrified that he’d trap me on the shoulder, matching my speed and running me into a bridge railing when the road narrowed. Or he’d drive me off the road entirely.

At one point, the road held a long curve to the left, and I could see well enough to get around the rig. I floored it and shot past him at 90. On a wet road. I seriously overworked my guardian angel that day.

Once I put some distance between me and the others, I realized something: That must be what claustrophobia feels like. I was panicked by an irrational fear, and desperate to get myself out of a harmless situation. Or, if not harmless, at least there must’ve been a better way to handle it.

When I hit the red light in Madisonville, the pickup driver pulled up beside me. He looked at me like I should’ve been commited, and I looked at him in search of that 1920s mustache. He didn’t have one.

Bring on the straight jacket.

6 Responses to A Driving Discovery