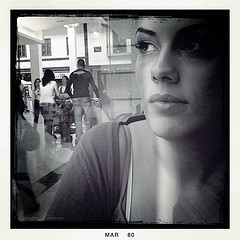 Your two main characters are in the same scene, but they’re not together. He’s doing his thing, she’s doing hers. You can reveal so much about both when you illustrate your POV character observing the other. Of course you can describe the observed character’s physical features, but why leave it at that? Why pass up the opportunity to tell your reader something about both characters?

As the author and creator of these people, you know things about them that 1) you want to introduce to the reader, and 2) you want to introduce to each of the of the two people in the scene. What you know about them is called “backstory,” a word I recently discovered was unfamiliar to some newbie authors (I also recently discovered that Miriam Webster has “backstory” as one word, so when you type it on your computer, ignore the little squiggly red line under it).

Whether you pre-plan your novel with outlines and character bios or, like me, you look at a scene and think, “How can I make the characters more interesting here?” and do a character interview on the spot, you need to have a backstory for each of the primary folks who populate your books. What you don’t need, though, is to dump the entire backstory into one scene and explain everything you think the reader needs to know about your hero and heroine all at once.

Anna was a late-bloomer, the ugly duckling who didn’t become beautiful by shedding weight until her early twenties. Although she’s a knock-out now, her self image, ingrained by kids’ cruelty during high school, is that of a fat girl. Today, she’s a computer scientist at the NOAA, National Oceanic and Atmospheric Administration, and spends the bulk of her time alone.

Cody was the star quarterback and played the role of  “popular guy” in school, but in truth, he’s shy and longs for a relationship that goes deeper than an appreciation of his athletic skills and build. He’s highly artistic, but since he got the bulk of his positive reinforcement from those who valued his athleticism, he played up to that image. Today, with his PhD, he’s a professor of English Literature, specializing in the Romance Era, at George Washington University. His biggest daydream is for sonnets to make a come-back.

Anna and Cody catch furtive glimpses of each other at their high school graduating class’s tenth reunion. She knows him, because everyone knew Cody Batson. He knew her as “Anna Fat Banana,” although he’d never used that name for her, but today, he doesn’t recognize her. He stands near the snack table, swirling the ice in his glass, surrounded by jock-types intent on recounting their glory days. He doesn’t hear them because~~~

His attention was drawn to the striking woman in the corner, talking softly with a couple other women. Who was she? He should remember a beauty like her. Probably a cheerleader. That might be why he didn’t remember. He’d never been attracted to the perky leg-kickers on the sidelines. Cheerleaders tended to be all show, with the depth of a pancake. No appreciation for Keats or Byron. Still, he should’ve remembered the smile, the dark wavy hair, the slender curve from her waist to her hips.

Randy Colbert, his tight end back in the day, slapped him on the shoulder with a loud guffaw. “Isn’t that right, buddy? A thirty-yard bomb, right to my hands.” Randy threw both arms up. “Touch down!”

Cody allowed himself one more glimpse at the cheerleader in the corner, and smirked. She’d find him more attractive as a quarterback than a poet. He threw himself into the sweaty conversation with the rest of the former team and clapped Randy on the back. “That’s right! Batson to Colbert. Connected every time!” He drained his glass and assumed the position. “Go long!”

In this short clip, I did more than present a physical description of Anna. I provided Cody’s backstory, illustrated how he filters his impressions through his personal experiences, and showed Anna’s personality simply by putting her in the corner. The fact that she’s hanging in the shadows with a small group of friends doesn’t dawn on Cody as being contrary to his idea of “the beauty” as a cheerleader. That speaks to his character, also.

Later, I could do the same thing through Anna’s POV, and after presenting their misconceptions, I could illustrate how the two overcome them to succeed in whatever plot task I set before them.

If you looked only at the story clip, how much would you learn about the characters? If you compared the clip to the backstory I provided, you’d see what I chose to omit from the scene. Since I wrote in Cody’s POV, Anna may still be a bit vague, but what the reader learns about her later will be consistent with the woman standing in the corner.

Instead of dumping backstory of each character into your work, find creative ways to illustrate them. Use every opportunity to deepen your characters through different techniques. Populating your novel with realistic, sympathetic people can bring your story to life.