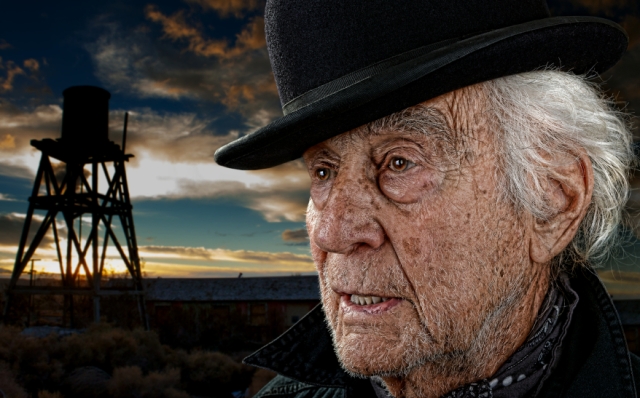 Everything about this guy intrigues me. His age. His thousand-mile gaze. The dapper tilt of his bowler hat that doesn’t quite match the expression in his eyes. The silken strands of gray curling at his ear and over his collar that contrast with the prickly stubble on his chin.

Who is he? The water tower in the background hints of a steam engine train; perhaps he was once a vagabond–a depression era hobo, riding the rails from town to town unbeknownst to the engineer. Where had he gone? What had he seen? What does he see now?

I can’t imagine telling his story in simple genre fiction. I love the disparity: a humble story written with a lofty pen.

I’ve always wanted to write literary fiction, particularly now, now that I’m away from the influence of college professors whose choices in literature make me cringe even today. More recently, I’ve read literary books that have touched me more than those chosen before–with exception of The Sea Wolf by Jack London, from my Literature of the Sea course. That one still fascinates me.

Literary fiction isn’t necessarily an exercise in high-falutin’ vocabulary, but it is a style of refined expression. Stories are often told in a dispassionate voice, seen through an analytical eye, and layered to an almost fathomless depth. The surface holds a story anyone would enjoy; but scratch the surface and the strata are revealed and laid open as far as the reader would like to dig. And sewn through each literary piece is the common thread of an “-ology”–theology, psychology, sociology–or their cousin filaments, philosophy, morality, and ethics.

It’s the genre of thinkers, and I believe it would be the most challenging genre to write. Which is why I want to try it. Me. The author who struggles over romance plots.

But for novels that hold the interest of only a small portion of the reading public, turn to literary.

Still, writing at least one is on my bucket list.