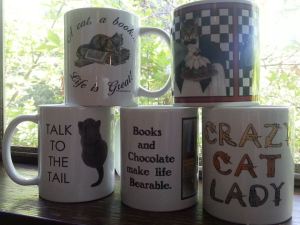 After weeks of planning and hours of nervous anticipation, the Cat in a Coffee Cup party is over. All that’s left to do is sweep the confetti and streamers from the floor and toss the paper plates and red Solo cups!

Final count of those signed to attend was 113, and believe me–it felt like every single one of the RSVP’ers actually showed up! I know not everyone did, of course, but we did have a wonderful number of actual attendees. My helpers, Liberty Speidel and Cathy Cermele, were hopping as much as I was, and the general consensus was that we needed more helpers.

There were four mug winners and four special surprise winners, and one grand winner to whom I will send my favorite mug of that collection (“Talk to the Tail”) and an autographed copy of my new release, The Cat Lady’s Secret. Scheduling nine giveaways in a two-hour period got crazy, regardless of how careful I tried to be, but we managed to do it.

If you’re planning a Facebook party, be sure to read “Secrets to Planning a Party.” Along with the advice I gave in that post, I’d like to add a few dos and don’ts:

Do have posts on the page before the party starts. During the week, I posted excerpts from the novel–the same ones I’ve posted here in my blog–along with the character images. I didn’t want the attendees spending all their party time reading, so those posts in advance allowed them to read at their leisure.

Do advertise on every social site you belong to. And like I said in the other post, change up your ads so they don’t get ignored.

Do preplan: I had my pictures ready and in order so I didn’t have to hunt for them. This goes hand in hand with preplanning your questions and script, not only what you’re going to say, but when you’re going to say it. I had a notebook beside me with the time written when each giveaway was due up, and each winner was announced.

Do have something pinned to the top of the page that gives attendees your instructions. I had the cutest cake with cat figures all over it. When someone wanted to know what to do, I told them the instructions were at the cake. Easy to find. And I kept the instructions easy and quick to read so folks would miss as little of the action as possible. I also provided a “warm-up” question so people could see how fast this would be.

Do get helpers. The three of us had a time of it trying to keep up last night, so if you’re expecting a huge turnout (and I wasn’t–I’m touched and honored that so many would come!), try to get at least five volunteers. My helpers greeted newcomers and caught questions I didn’t see. Before we started, I sent them a list of questions that would be presented with each giveaway and the time schedule. They also choose the winner, which was tricky. Next time, I’ll tell them to pick a number and count down to that number, so the choice will be quicker.

Do have your drawing questions and winner announcements in all caps with plenty of stars or happy faces or whatever you want to use to make these posts more visible.

Don’t panic if you get behind. Even though you can’t keep up with your guests, they keep up with and entertain each other. It’s great to have helpers catch questions and give instructions.

Don’t forget to thank everyone!

To everyone who went to my party, THANK YOU!!! ❤

6 Responses to What a Blast!