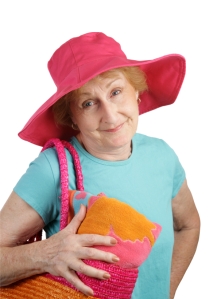 The tiny town of Dogwood, Texas, has its share of homeless and feral felines, and Millie has taken it upon herself to get every last one of them off the streets and in a home. Until she can find a forever family for them, however, she keeps them in safe in an old Woolworth’s building that Emily Taylor renovated and now calls “The Litter Box” (kind of a double entendre thing: kitty litter, litter of kittens. Get it? Of course you do. I’ll stop stating the obvious now.)

Millie has her favorite hang-outs where she’s certain to find a stray or two–the courthouse, the bus stop, other spots downtown. Fortunately, most places are equipped with shaded benches where she can sit and ease her perpetually sore feet (you’ll be surprised to learn why they’re sore!).

Millie is what you’d call “eccentric.” She wears mismatched clothes she purchased from the local Goodwill store. She walks everywhere she goes, carrying a big tote bag and a long-handled net. She’s never used the net to catch a cat–they’d go berserk!–but she keeps it with her all the same.

She goes out on a regular basis, with a good degree of success. The first place she takes her captured treasures to is Scott Barlow, the vet, to get them cleaned up and healthy. And yes, to have them spayed or neutered, too. Can’t have the cats adding to the growing population of free-roaming felines!

But someone who goes all over town is bound to discover a thing or two about the people who live in it, especially when she keeps an ear open and her eyes alert.

Annie is new in town, and Kyle was supposed to meet her as soon as he had things squared away in Waco. But that didn’t happen the way they’d planned.

So, it’s Cat Lady to the rescue!

She came to the aid of another, too–Mitch Sawyer and his family desperately needed the kind of help Millie could provide, and she did everything she could to make sure they got what they needed. It meant she had to sacrifice a little, had to make a promise not to help anyone else until finances were better fortified, but this was nothing.

She went back on her promise only once . . .

Such a small thing, right? No problem.

Guess who got the wind in his hair now!

But before you start thinking the entire novel is about Millie granting wishes, let me warn you: There’s more to it than that!

Tune in to my Facebook page for all the fun that’ll be going on during the next few weeks. Know what all the fuss is about?

And I’ll be doing all sorts of fun stuff between now and then, including the “Cat in a Coffee Cup Giveaway” on June 12th, where I’ll be giving away a new coffee mug every twenty-five minutes for two hours! It’s gonna be a blast!

Meet Millie, the Cat Lady! Everywhere she goes, she finds those she can help. http://wp.me/peDqs-1FJ #CatLadysSecret #ChriFic