Under Billy Coffey’s black hat is a head that got screwed on straight the hard way, and I’m sure he’ll tell you it still needs tweaking now and then. But under that ol’ hat, I found a man who has his priorities right: God, family, community, work. His wife is his photographer, his children are his inspiration, his friends are loyal–and his work? Well, it took off and it’s going strong.

This country philosopher is no stranger to pen and paper. He wrote his first story at age seven: a five sentence tale about a boy who prayed that God would rid the world of asparagus. Gotta love it.

In researching him for this interview, I discovered a few “Billyisms” that speak volumes about him and his writing abilities as an adult:

“Life with a writer isn’t all bubble gum and cotton candy.”

“Macho manliness trumps stupidity every day of the week and twice on Thursday.”

If you’re on Twitter, chances are you’ve seen him around. Here’s an opportunity to get to know him better:

Linda: When you were seventeen, you had an accident in the sixth inning of a game, ending your baseball career dreams. How did you get hurt?

Billy: It was a tear in my rotator cuff the doctor said had actually begun years before. My throwing strength had deteriorated to the point where I couldn’t pitch anymore, so I was switched to shortstop for a while and then to second base.

I was in the field that inning when the batter hit a ground ball past the pitcher. I caught the ball behind second base, which meant I had to make the throw sidearm to my left while all of my momentum was still going to the right. The pressure was just too much for my shoulder to take. It felt like someone had stabbed me in the arm with an ice pick.

Linda: For a while afterward, your Amish grandmother and Mennonite mom must’ve bruised their knees praying for you as they watched you deteriorate emotionally from the loss of your dream. But your “Come to Jesus” moment came not long after your injury in an incident that was too miraculous to be coincidental. [For the full testimony, click here.] Does that time in your life influence your writing today?

Billy: Oh, yes. I think it influences everything today, but my writing especially. It helps give me a perspective of hope I might otherwise not have, and I try to weave that into every story and post I write. If that time on the mountain taught me anything, it’s that every moment is not only a teachable one, but a holy one as well. I realized I had tossed away years of my life focusing on the things that didn’t matter. Since then, I’ve tried to live each day by focusing on the things that do.

Linda: You credit your kids with the title of your blog, “What I Learned Today,” when they turned your question around on you: “What did you learn today, Daddy?” You wrote:

What to say? That I didn’t learn anything? That at a certain age a person tends to feel they know too much and have neither the time nor the inclination to know more? That despite what I’ve told them, ignorance most definitely is bliss?

From what I’ve read in your blog, your attitude has shifted a bit. Are you better able to answer the kids’ question now?

Billy: I make it a point to learn something every day now, even if that something I learn today just reinforces what I learned yesterday. I don’t think ignorance is bliss anymore; it can save you from a lot of worry and fear, but it also leaves you blind to the beautiful things in life. I still get that question tossed to me on a regular basis, and I am better able to answer it. Not necessarily because I know more, but because I watch and listen more. If I want to teach my children anything, it’s that curiosity is an amazing gift that should be used often.

Linda: In your agent, Rachelle Gardner’s blog (Rants and Ramblings), you wrote about a friend who loves to climb and his most important lesson, which he calls “The Middle Rule”:

“When you’re climbing something,” he says, “it’s the beginning and the end that are easiest. In the beginning you’re full of hope. You think it’ll be easy. And when you get to the end you have this rush, a sense of accomplishment. But the middle? That’s the toughest. That’s when you look down and realize you’ve come too far to stop, and you look up and think you’ll never make it. It’s easy to get stuck in the middle of a climb.”

Do you have any advice or encouragement for those of us who are in the middle?

My advice: focus as much as you can on where you are. That way all the slips you’ve made along the way won’t matter as much and what’s ahead will be easier to face. And my encouragement is this: don’t hate your climb. It’s easy to get frustrated when it comes to writing. Everything comes so slowly and may not even come at all. But the mountain you’re on gives you two things a lot of people lack—it gives you a purpose, and it gives your life meaning.

Linda: Finally, I loved the post “How to Take a Punch.” In it, Charlie says: “A man never knows what he’s made of until he gets punched.” I wasn’t surprised by the fact you found the statement philosophical, but now that you’ve been punched, can you tell us what you’re made of?

Billy: I don’t mind saying I got the snot beat out of me that night, though I did manage to get a few shots in myself. All those things you hear in the Rocky movies about boxing making a man out of you are true. It really is a metaphor for life. I didn’t mind the fact I was bloodied and swollen by the time I was finished because of this one simple fact—he never knocked me down. He was too experienced for me to possibly hope to beat, and I was mature enough to know that. Not kissing the canvas became my goal. So yes, I can tell you what I’m made of.

I can take a beating and still smile at the end. 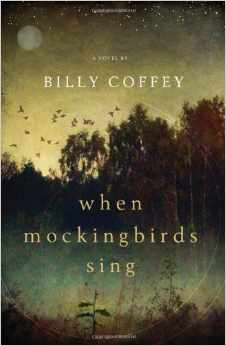 I just finished reading When Mockingbirds Sing. If you haven’t read that one, put it on your TBR list. Little Leah lives the life of a modern-day prophet at an age when she’s not old enough to fix her own meals. Her words, given to her by the Rainbow Man, affect her family, her best friend, and the entire town.

Billy weaves the tale in such a way that you never know what’s going to happen. He teases you from the very first, starting with “what’s that ‘blanket-covered object’?”

This one will not only keep you engrossed, it will make you think. For writers: read it twice. Once for the story, again for the technique.

Author/Freelance Editor/Speaker (writing and editing topics).
View all posts by Linda W. Yezak →
This entry was posted in Authors, interviews and tagged Billy Coffey, When Mockingbirds Sing. Bookmark the permalink.