If you don’t find this funny and appropriate for the upcoming season, check your pulse. Linda’s “epiphany” snaps the wishbone in favor of loving moms everywhere~~~ 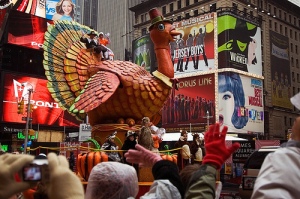 As a child I remembered waking up Thanksgiving morning to the aroma of roasting turkey. I bounded down the hall to the beat of the Macy’s Day Parade on the television. Mom was always in the kitchen and Dad was in his recliner. I’d pile on him and watch the parade till all the relatives arrived and lunch was served.

When I married Neal we continued the tradition of going to Mom’s for Thanksgiving. We brought the green bean casserole and the kids. Mom did everything else.

A few years later the holiday cooking mantle was passed on to me when Neal’s job transferred us to another city. This new responsibility didn’t concern me. Mom didn’t seem to mind cooking such an extensive meal, why should I? Her face always had a rosy glow when she cooked. From enthusiasm I supposed.

Before we moved, she wrote clear, step-by-step instructions for me to follow. I read over them. Hey, this was going to be a cinch! No problem.

Thanksgiving week finally arrived and I pulled out my instructions. First I had to find the perfect turkey—one that would feed our family of seven, plus provide ample leftovers for all the fantastic, delicious, dishes I could dream up. So, I purchased a twenty-eight pounder.

Next on the “to do” list—thaw him. Naively, I thought that would only take a few hours on the counter. That is until my food-safety husband nixed my plan and said I should have started the defrosting process in the refrigerator a week ago.

Now he tells me.

I panicked! Thanksgiving was in two days. I needed a quick defrost method. Then Neal remembered how his granny put her turkey in a bathtub full of cold water. Quick as a wink our bathtub was full and Mr. T, as we fondly dubbed him, contentedly floated around the tub.

Later that afternoon we heard strange noises coming from the bathroom.

Neal and I raced to the bathroom. As soon as our feet hit the hall carpet it squished with water. Not good. We stepped on the flooded bathroom floor to see a diaper floating by. Alarmed, I shoved back the shower curtain to find our two-year-old son, William, laying on top of the frozen turkey pushing himself from one end of the tub to the other like a bucking bird rodeo.

I grabbed him off the main course. All his cheeks were pink and shiny. I handed him to Neal and went to work in the kitchen.

The rest of the day and into the night I chopped, diced, sliced, mixed, rolled, sautéed, simmered, boiled, and baked. It didn’t take me long to realize that my mom’s rosy glow wasn’t excitement.

It was heat exhaustion.

The alarm sounded unusually loud at 5 A.M. Thanksgiving morning. I crawled out of bed and felt my way down the hall to the bathroom. In my sleep-deprived stupor, I grabbed Mr. T from the tub and hoisted him to my hip. Glacier water spilled down my nylon gown making it cling to me like a second skin. Every nerve in my body shrieked red alert! I won’t repeat the words that silently formed on my lips. 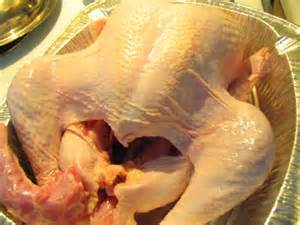 In the kitchen I peeled off the wrapper off Mr. T and stared, shocked at the sight of a naked turkey. The only ones I’d ever had the pleasure to know wore a nice, crispy, brown skin. This cold, clammy thing was pale and pimply.

Everything in me revolted.

Glancing at the recipe, it called for the giblets to be removed from the cavity.

Only one problem. I couldn’t get the stupid legs apart! Some kind of bar held them together. What was the purpose of this thing? Some kind of chastity belt for birds?

I tugged, yanked, and jerked for fifteen minutes. Finally the dark greasy cavern yawned open—and I was supposed to put my hands in that?

My mother’s instructions said to stuff celery and onion in the carcass, so I closed my eyes and crammed them in. After thoroughly stuffing him I heaved that bad boy to the stove, shoved him into the oven, slammed the door shut, and leaned against the wall.

This wasn’t the way I remembered Thanksgiving.

Later that morning, the savory aroma of roasting turkey filled the house. Lively music from the marching bands filled the house. The kids woke up, bounded down the hall and piled on Neal to watch the Macy’s Thanksgiving Day parade. I, on the other hand, worked feverishly in the kitchen wearing that blasted rosy glow.

Neal said grace and in less than thirty minutes we consumed over a hundred dollars worth of food that took over two days to prepare. After dinner Neal reclined in his chair and the kids went outside to play. 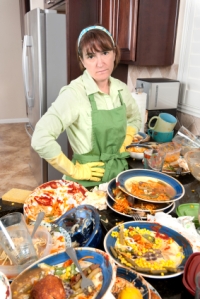 I was left to clean up a kitchen that looked like Bourbon Street the morning after Mardi Gras.

So this is what my mother did every year?

My hands were chapped. My fingers were cut and burned. Every muscle in my body begged for a glass of wine and a hot bubble bath.

That day I decided my mother deserved sainthood!

Through the window I watched the children jump into a pile of leaves, just like I did when I was a child. Neal snored in his chair, just like Dad. And I began the arduous task of cleaning, just like Mom.

Indulging in a little self-pity, I grumbled under my breath. Nobody in my family had a clue how hard it was cooking Thanksgiving dinner. Come to think of it, neither had I till that day.

Immediately I got off my self-righteous perch and practiced the true meaning of Thanksgiving.

I called my mother.

When she answered I said, “Mom? Thank you for your hard work all those years of cooking our holiday meals. We are not worthy of you!” 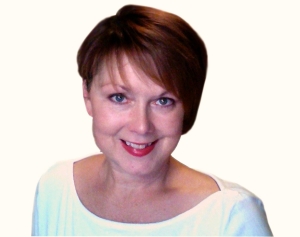 Linda Apple is the author of, Inspire! Writing from the Soul, and Connect! A Simple Guide to Public Speaking for Writers. She is published in sixteen Chicken Soup for the Soul Books and numerous devotional guides. She also writes fiction and has several short stories published in local anthologies. Her current work-in-progress is a women’s fiction contemporary novel, The Women of Washington Avenue.

She is also a motivational speaker and instructor. In addition to speaking at women’s and writer’s groups and conferences, Linda serves as the Arkansas Regional Speaker Trainer for Stonecroft Ministries, an international organization.

Linda and her husband of 36 years, Neal Apple, live in Northwest Arkansas close to their five children, their spouses, and nine grandchildren. 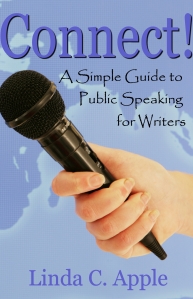