Author/Speaker/Editor/Writing Coach Jeanne Marie Leach has a sweet way with words, but back in the day, sweetness in the kitchen was a different matter~~~

Back when we were younger and attended the “Young Married’s” Sunday school class (we were already married over 10 years, but had no children so we fit in just fine), we had frequent pot luck dinners together. We’d meet at different homes each time, and everyone would sign up in advance to tell what we wanted to bring.

For this particular supper, I signed up to bring my blond chocolate chip brownies which, if I say so myself, were to-die-for. 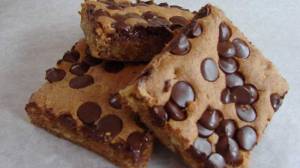 I pre-cut the brownies and left them in the 9 X 13 cake pan, put on the lid, and we headed for the party. One other person had also brought a desert, and when I finished my main course and went to get some sweets, I noticed only one of my brownies was gone and the other desert had been devoured. I’ve never seen anyone from that group pass up anything with chocolate in it. I took a piece and returned to my chair in the living room amidst all the laughter and talking.

I took one bite of my brownie and spit it out! “Eww!” I said loudly.

Everyone quieted and looked my way.

Several of the young women gave me horrified looks because of my outburst. No doubt they were wondering if I could get any more rude.

“It’s okay. I brought these. Don’t anyone eat these!”

I had left out the sugar! No doubt whoever took that other brownie whispered the message around the room to not take any of the cardboard brownies.

Jeanne Marie Leach is a multi-published author, freelance editor, speaker, and writing coach, specializing in the fiction genre. She is the Coordinator for the Christian PEN: Proofreaders and Editors Network where she also teaches classes on editing fiction. Jeanne judges numerous writing contests through the ACFW, both on the national and state level. She was the 46th member to join the ACFW and also is a member of Christian Editor Network (CEN).

Her second book in the Brides of Glory Gulch series, Trouble in the Cookhouse, is being released for Kindle around the middle of October.