Editing Lessons from a Housewife 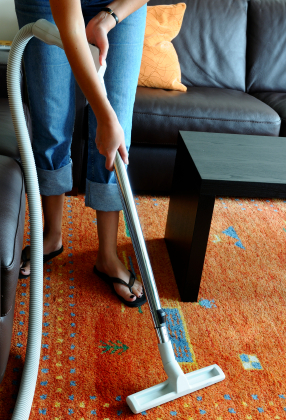 There you are, determination gleaming from your eyes. You’re gonna clean house! You’ve got your grungies on, hair back in a ’50s style do-rag–well, okay, maybe not the do-rag–and you’re ready to conquer the dirt, grime, and general mess. You’ve got the vacuum cleaner roaring away and overall, you’re pleased with your progress.

But there’s that one little thing, whatever it is, that refuses to be sucked up. You run the vacuum head over it several times, first from this direction, then from that. You move the head more slowly, then more quickly. Finally you bend over and pick it up, and instead of throwing it away, you put it right back down again. Only thing wrong was that the thing was stuck in the carpet fibers. You run over it again.

Go ahead, I dare ya: Tell me you’ve never done it.

If you say you’ve never done that while vacuuming, I probably won’t believe you. Silly of me perhaps, but since I’ve done it, I assume everyone else has too.

If you tell me you’ve done the equivalent while editing your novel, then Bravo! You’ve gotten the gist of this post.

The kind of tenacity you need while self-editing is similar to what you suffer through while you’re wearing that do-rag. Doesn’t matter what it is. Sentence isn’t right? Run over it again. Scene needs revamping? Try it from this direction, then that. Instead of throwing it away, try coming at it from a different angle.

Of course, just like in vacuuming, if you can’t get the stupid thing up, maybe you should throw it away manually. Block it off and hit the delete button.

As usual, one of my critters had problems connecting with my female MC in The Simulacrum. Seems like I have no problems with my male characters, but put a woman in my path and I’m lost. This isn’t the first time. Nobody has ever liked my female characters until I’ve played with them some. This time, it took me by surprise because Mary is as clear to me as the woman next door. But that doesn’t do any good if she isn’t clear to my reader, and better to find out from a critique partner than a publisher.

My critter suggested I back time up for Mary’s opening scene and let the reader see her in her element instead of catching her in the midst of tragedy. Made sense.

I came at the scene from this angle, then that, and finally landed on a way to illustrate her as I know her, a smart, sophisticated liberal who occasionally rams into the wall of self-doubt. (I can hear my conservative friends now: Liberal?! Your MC is a liberal??? You gotta be kiddin’ me! Yes, she’s a liberal. But in my defense, this is the beginning of the story. Every character has an arc, right?)

Doing this not only made Mary’s personality clearer for the reader, but also clarified a few things for myself–primarily that I need to illustrate her self-doubt more often. Without it, she’s a bit of a cardboard character.

So, take this analogy from vacuuming and stick with it until you’ve got it all cleaned up-because if you don’t take this analogy from vacuuming, the brilliant idea I had while pushing that clumsy monster around the carpet will be for naught. Especially since the carpet will get messed up again the moment I put the cleaner away.

Such a thankless job. But that doesn’t have to be true about editing. Do a good job with that and your readers will thank you.

6 Responses to Editing Lessons from a Housewife