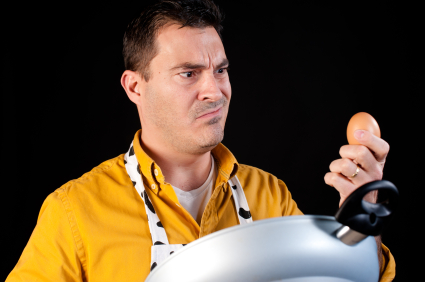 We had so much fun with “Best Failed Recipe Ever!” that I invited anyone who’d be interested to send me their worst cooking calamities. I think you’ll get a kick out of them, like I did. This week I’ll be out of town (finally getting a chance to spend more than just a weekend with Mom), and some of my friends came through to cover for me. After this week, I’ll post a new one every Friday for as long as they last–and if you’d like to contribute, for fun or as a promo op, write me and let me know. (My email address is on my Triple Edge Critique Service page. Put “Cooking Calamities” in the subject line.)

Artist/author Carrie Stuart Parks was the first to answer the call with a classic “newlywed cooking catastrophe” tale:

I was getting married. And meeting my future in-laws. And trying to impress them with my outstanding culinary skills. I’d worked for weeks getting just the right menu: Greek salad, tiny pearl onions in cream sauce, garlic mashed potatoes (I am from Idaho, ya gotta have potatoes), and the centerpiece: cranberry glazed duck. I prepared two ducks to be sure I had enough. They were to bake for several hours, slowly absorbing the cranberry glaze. The recipe called for me to poke the meat every half hour to drain off the extra fat. I stabbed their bare skins as per directed, set the perfect table, and waited.

Everybody came: aunts, uncles, new mother- and father-in-law, cousins … the entire clan. I was gracious, attentive, the perfect new member of the family. At the appointed time, I had them all sit at the table while I brought the first course. While they enjoyed their salads, I returned to the kitchen to place my perfect fowls on the decorated platter. Two raw ducks. The red cranberry glaze hid the raw, bleeding birds.

I did what every respectable hostess would do: I stayed in the kitchen and cried.

A half-hour later my father-in-law came into the kitchen to see why dinner was only a single salad. I was still weeping. The sweet man helped me cut up the ducks and microwave the sections. Dinner was … uhm … done. I’ve not prepared duck since.

Carrie Stuart Parks is an award-winning law enforcement instructor of forensic art. She and her artist-husband, Rick, are the authors/illustrators of five books on drawing and watercolor.

Carrie’s debut novel, a suspense/thriller, will be released next year by HarperCollins Christian Publishing.