The Harbinger by Jonathan Cahn 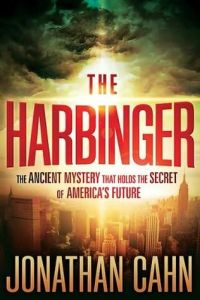 Messianic Jew Jonathan Cahn wrote one dynamic wake-up call for the United States. He takes Isaiah 9:10, a proclamation Israel made after being attacked by Assyria, and illustrates its application to America from 9/11 forward. The parallels he presents are astounding–and they’re wrapped in the style of a novel.

So let me say this right off: Cahn is no novelist. If you’re looking for a good story about prophecy fulfillment, keep looking. This one ain’t it. Cahn’s style drove me bonkers, and I found myself skimming to the point I’d sometimes miss important things and have to go back.

Cahn points out something that many Americans no longer believe: The USA began as a Christian nation, based on Christian principles. The historic evidence of this fact is so overwhelming that only a redaction of history could blind people to its truth. Therefore, our history has been redacted. And the corrupt versions have been taught for so long, they’ve become “truth” to those who swallow whatever is spoon-fed them. (Rough words, perhaps, but I’m angry about the denial of our Christian roots when proving their existence is so easy.)

As a Christian nation, dedicated to God as the “New Jerusalem” at Plymouth Rock, we’ve enjoyed God’s protection for centuries. Have bad things happened to us as a nation? Yes, but you can see God’s hand in all of our victories.

However in the last several decades, His existence has been denied and He has been kicked out of all public forums. As a nation, we no longer honor His word or His ways, so we shouldn’t be too surprised that He has taken away His hedge of protection. September 11, 2001, is the first true sign that we are no longer in His favor, but only a discerning few recognize it. The same discerning few who recognize the signs of the times we’re currently in and the implications of things to come.

After the attack, two political figures used Is. 9:10 as a proclamation and promise that we will rebuild. Valiant and encouraging words spoken by representatives of a prideful nation. There’s nothing wrong with wanting to rebuild, wanting to show our enemies we can’t be defeated. But the failure to turn to God during our most grievous times only ensured the removal of His hedge of protection around us. Had those two politicians read the verses before and after Is. 9:10, they may have chosen more humble words of encouragement.

All this and more can be found in Cahn’s book–and for this reason, I can recommend the book. It’s yet another call to “Wake up, America!”

9 Responses to The Harbinger by Jonathan Cahn