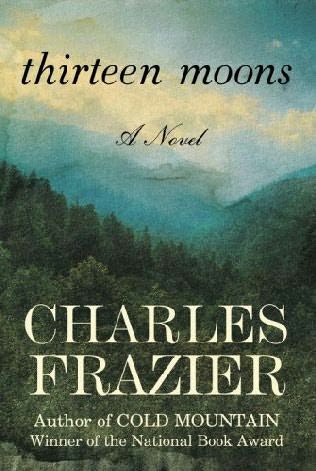 Sometimes I come across a book that will draw me in and keep me steadily turning pages without me clearly understanding why. America, America, by Ethan Canin, was that way, and so was this one. Maybe that’s part of the magic of literary fiction. Not everyone likes literature, but I’m learning to appreciate it more, and I definitely learn from it. Charles Frazier, for instance, has a delightful way of slipping in wit and humor without warning, and his descriptions are superb. Some variation of his techniques will no doubt make their way into my own writing.

In 2010, I read The Fire in Fiction by Donald Maass and decided to read every single book he mentioned in this work to see what catches his attention and makes the grade in his opinion. Thirteen Moons is on pages 29-30 under the subheading “Greatness” in Chapter One.

Perhaps you realized the implications of the previous paragraph. Yes, after all this time, I’m still in Chapter One. I didn’t realize how many books Maass mentioned or how little time I’d have to read for pleasure. I’m still determined however, and God willing, I’ll be out of Chapter One by the end of the year.

The novel is a memoir of sorts of the ancient Will Cooper, spanning from an era before there were civilized settlements along the Mississippi River, through the Civil War, and further into a time when telephones were new contraptions and passenger trains criss-crossed America. Abandoned by his people and adopted by the Cherokee, Will becomes a businessman, lawyer, white Indian chief, Washington DC lobbyist for the Cherokee nation, and a state senator. To hear Will tell it, everything kind of happened by accident, although some may have been by design. He tells of his successes with humor and his failures with honesty, but little remorse. He is a capitalist who disdains capitalism, a rich man with no respect for money, and a life-long lover of a woman who isn’t free to love him back. His two primary influences include Featherstone, the worst the whites have to offer, and Bear, the best the Indians have to offer. His interactions with the two are part of what makes the book so compelling.

Occasional rough language and mild sex in the novel will prevent some who visit this site from reading it; the fact that it’s literary will prevent others. But if you’re game for a different type of Indian story, you should check this out.