This is Speranza, rescued by a friend of mine who gave her the name, which is Italian for “hope.” Laura is great with horses, and seeing this one broke her heart. She couldn’t help but to take the mare in. If I were able, I would’ve done the same thing.

I can’t join the inevitable argument that the former owner was evil for letting the horse deteriorate to this state. I don’t know his situation. Sometimes former owners are  just plain ignorant of what they’re getting into when they buy a horse. They don’t understand how expensive it is to care for a horse or don’t know the basics of how to do it. They figure the more domesticated horses are able to survive off the land just as the mustangs do out west.

That doesn’t make them evil–just stupid. 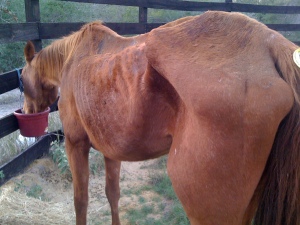 If you’re going to put a horse out to pasture, at least make sure the pasture has hay. Granted, Texas has been in an awful drought for the past several years, and last summer was killer. Temps soared over 110 with no rain to offer a break. Pasture hay didn’t survive. Ranchers who could afford it trucked hay in from other states, but not all horse owners could afford it.

Does that justify this? No, but it’s still a hard call. I doubt this was an unusual sight last year. I imagine auction barns were full of horses, put up for sale by owners who just couldn’t afford them anymore. With everyone in Texas in the same situation where feed prices and availability are concerned, I doubt the animals were in high demand. If they didn’t sell, they returned to their original owners–the ones who couldn’t afford them to begin with.

Most ranchers had to sell off huge percentages of their stock–some to buyers as far away as Nebraska. It wasn’t a seller’s market last year, and that goes for horses, too. It wouldn’t surprise me if the only buyers were hobbyists who found out the hard way just how expensive horse care can be.

The horse controversy is complex and multifaceted, so I can’t automatically come down on the side of the animal rights activists, any more than I can land squarely on the ranchers’ side. I do know, however, that closing the slaughter houses has caused some serious problems, as has changing the laws pertaining to how a horse can be put down in general. Reality can smack romanticism down, and the sometimes the reality is that euthanizing an animal is the least cruel answer to an overpopulation problem. While it’s hard to think of this as a viable alternative, it’s even harder to see Thoroughbreds and Quarter Horses in this deteriorated state.

Speranza was lucky–Laura was ready for a new horse, and the only thing wrong with this one was that she was underweight. You can still see her ribs here, but her flanks have filled out again.

God has a special place in his heart for animal rescuers, I just know it. I don’t think he’s overly fond of animal worship, but I believe he rewards the stewards who take good care of his creation. And I believe horses are his most beautiful creation.

People like my friend Laura are more precious than gold.

Speranza’s is a victory story! 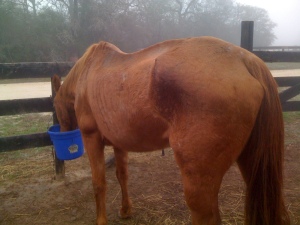 Author/Freelance Editor/Speaker (writing and editing topics).
View all posts by Linda W. Yezak →
This entry was posted in Personal, Promotion/Publicity/Marketing. Bookmark the permalink.

11 Responses to Speaking of Horses