(Just a reminder: Give the Lady a Ride is now on Kindle and Nook!)

If you’ve never been to a writer’s conference, go. From the biggest to the smallest, these conferences always have something to offer, and the Texas Christian Writer’s Conference in Houston is no different. Wonderful people such as DiAnn Mills, Terry Burns, Elizabeth Ludwig, Janice Hannah Thompson, Martha Rogers, and Eddie Jones were among the guest instructors, and learning at their knees was an opportunity I couldn’t miss. 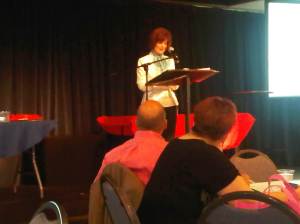 I took four classes, two taught by DiAnn, one by Henry McLaughlin (on plotting), and one by Eddie, and scribbled my notebook full of gems.

My first course with DiAnn Mills was “Using the Social Media,” something I stink at and view as a necessary evil–particularly Twitter. It’s not that I don’t recognize how valuable a tool it is, it’s that I can’t get over the fact that I’m a match in a bonfire and can’t imagine that I personally can reach that many people. DiAnn gave us a handout that included a post by Mike Hyatt I’d read before. In this blog post, Mike sang the praises of Twitter. I wrote him, “You’re Mike Hyatt! You can post about your morning jogs and get hundreds of tweets. I’m a housewife. I could post the same thing and not hear a peep.”

But DiAnn touched on 140-character content and reaffirmed what I was doing. She said she’d tweeted something like “M&Ms. Which color is your favorite and why?” I loved this because it was similar to my Facebook post, “Texas needs rain. Know any rain songs?” Friends knew ’em and posted songs with rain lyrics all afternoon. Of course, DiAnn gave us other ideas, too, and she emphasized that “It’s not about you!” No one is going to pay attention to us if all we can talk about is ourselves.

Later in the day, she taught “The Sagging Middle”–that long part of the book between the promising opening chapters and the soul-satisfying end where authors must maintain readers’ interest. Every tip she gave hit high on the value scale, but my favorite was “use the setting as the antagonist” in a scene. That little nugget will be packed away for future reference.

I learned one thing from her that she didn’t know she was teaching. At the bottom of her handouts, in tiny print, is her name and blog address. That struck me as a simple, brilliant marketing tool. I’ll be passing handouts around at every speaking engagement from now on. 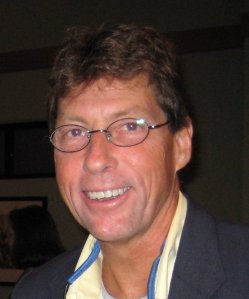 What I learned from Eddie Jones in his “Amazing Results with Amazon” is priceless and far too much to summarize here. Let me just say this about it: you may find some short Kindle books written by yours truly in the near future,  just as soon as I figure out how to do it. He went through the how-tos so fast, and was interrupted so many times, that I’m not guaranteeing it’ll happen soon, but it will happen.

I sat with Eddie at lunch, and since we both have books published through PYP, I had an opportunity to show him mine. He looked at Give the Lady a Ride, and we discussed the trials I had while uploading the book trailer on YouTube.

To fill you in, I’d used the book title and every tag I could think of dealing with it, including “bull riding.” Not smart, when YouTube advertises other people’s videos on yours. Mine is a video for a Christian novel, and the following clips were along the lines of “Hot Babes on Mechanical Bulls!”

I had to strip mine out, reload it, omit every tag dealing with bulls and bull riding, and title it “Christian Novel by LW Yezak.” Boy howdy, you can find it in a heartbeat now! (Yes, I’m being sarcastic.)

Eddie’s idea is for me to find one of those joints that has a mechanical bull and ride it. I’m not kidding–and if you’re sitting there with your jaw hanging open, you know just how I felt! But it was a great idea: Go to this place with a videographer around four in the afternoon when it’s virtually empty, talk to the manager about what I want to do, and see if I can ride the bull. After I do, I can present a message akin to: “Like this ride here, life can be rough, can buck you to the point of despair. But trusting God can make your ride smoother.” Slip a note about my book at the bottom, complete with the link, and upload it right along with the Hot Babes.

Love it! Can’t imagine doing it (or MSB allowing it), but I love it!

The conference invigorated me, amped me for the things I know I need to be doing. If you’ve never been to one, go. Network, learn, break bread with others. It’s worth every penny.