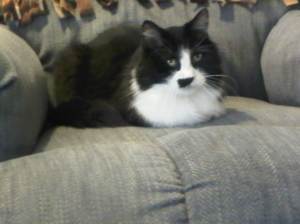 This little girl is around seventeen years old. Her name is Belle, and don’t let her age fool you–she’s a mighty huntress. Or she was until 2007 when, after two consecutive years of battling fleas inside my home, I sentenced this indoor-outdoor fur-ball to house arrest.

Most folks who have outdoor cats are aware of their generous nature and wouldn’t be surprised that Belle is no different. She always left presents for me just outside the patio door: moles, field mice, sparrows. A crawfish one time, a fingerling bass another. What a sweet, giving little lady. Of course, add her gifts to those Tom and Cuddlebug provided, and I was never in want for oddities.

The tricky part was recognizing Belle’s tone of voice when she had a present and knowing not to open the door. Her “Let me in!” always sounded different from “I’ve got a present for you!” The latter was usually sung with the cotton-ball effect of having her mouth full. And whatever dangled from her furry lips wasn’t always dead.

I learned the lesson of live-critter/voice-tone one evening while I was home alone. I’d been worried about Belle because I hadn’t seen her in a few days. She was a champion snake hunter; sometimes she got bit and would slink into the woods to sleep off the venom. This particular evening, I was so glad to hear her voice, I opened the door without thinking. She traipsed in victoriously with something dangling from either side of her mouth. A lesson learned from the great outdoors was not to chase her when she had her mouth full. If she wasn’t ready to relinquish her treasure, she’d take off and I’d never catch her. So I waited until she decided to lay her gift down for me.

Just a side note here–I’m not afraid of snakes, I just don’t want them in my home. But that day, what I wanted was overruled by a fuzzy-tailed feline who dropped the slithering thing in front of the fireplace and pranced, head high for a job well done, to the food bowl.

Granted, the snake couldn’t have been out of its shell for longer than a week, but a snake’s a snake, and while I’m not afraid of them, I do have a healthy respect for them. Especially since I can’t tell the good ones from the bad ones, and generally face all of them with shotgun in hand. Outside.

What to do inside?

Well, if you’re not afraid of snakes, the anticlimactic answer is to snatch the hearth whisk and sweep the little scaly-skinned creepy-crawly into the ash shovel and toss it outside. At least, that’s what I did.

It was far more comedic when my husband learned his critter/tone lesson. Again, it happened after Belle had disappeared for a few days.

“I’ve got a present for you!” she sang from the patio.

“Belle’s home!” MSB bolted from his recliner and flew to the door. Belle is his favorite.

Belle slipped between hubby’s feet and zipped into the house.

“She has a . . . !” He dove for her. She opened her mouth, releasing her present, and darted toward me as I emerged from the kitchen wiping my hands on a dishrag. That’s when I saw it.

Picture this: A red-bellied woodpecker jetting maniacally around the living room, a black-and-white streak of fur flashing by, a six-footer windmilling his arms trying desperately to shoo the crazed bird outside.

And me standing there in a fit of giggles taking it all in. Man, I wish I’d had the video camera!