What’s the story about? We don’t know yet. But we do know it involves horses, kids and a high school counselor.

A few weeks ago, I wrote of how my class is collaborating on a book–at least we began then. Since I wrote the post, we hadn’t met again. Real life has a tendency to interfere and it did just that for two whole weeks. But last night, we met again and started populating our book.   If you really want a chance to giggle, get together with a bunch of friends and start creating characters.

The only rule in brainstorming is that there are no rules. No idea is too silly, too far-fetched, too anything to be withheld from the ring, and the results can be both hilarious and fruitful. 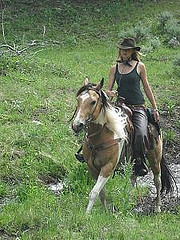 Becca Nichols, a rancher’s daughter who was redirected from a path of crime when she was a teenager by getting sentenced to community service working for the Neglected and Troubled Kids Rehab Center on a horse farm. Today, as a high school counselor, she runs a similar farm in the summer on her father’s ranch.

Bruce Nichols, her stern, no-nonsense, widowed father who was too busy to be active in her life when she was young, and now has difficulty relating to her.

Todd Travis, her boyfriend-to-be, a Jeep Cherokee drivin’ good lookin’ hunk of a honey who is the kids’ probationary officer.

Clara Russell, widow, family friend, lives on the premises as chaperone for the troubled kids. When you think of Clara Russell, picture “Aunt Clara” from the old Bewitched series, then give her a set of knitting needles. Clara likes to knit, but only has one project–which she never finishes. 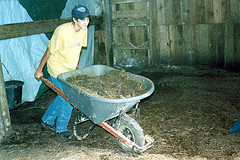 Zach Miller, Opie Taylor-ish, freckled, small for his age (12), talks alot–stretches the truth about himself to make himself sound more important, but he’s a follower, especially of older kids. Self-important. Vandalism of school property–graffiti. Small scar along his right eye from where his dad hit him. Tells everyone a different story about it, usually with him being the hero in some brawl.

Jose Montoya, possession of marijuana; 14.  Under the influence of older brothers. Resident bad guy, but isn’t really as tough as he puts on. He’s the cool one in dark shades. Knows how to get stuff.

Jessie Graham, is the tough one; she’s the type who’ll cry in private, but beat the tar outta the guy who catches her. She’s 14 with brown hair and green eyes; mom’s boyfriends “touch” her, and she keeps running away from home.

Kaitlyn Hoyt, the 12-year-old peace maker, the one everyone loves. Foster kid, passed over for adoption. Got caught shoplifting, but she didn’t do it. She’s taking the rap for a younger foster sister.

Nikki Parker – the 13-year-old romantic (reads romance novels). Wants to fix Becca up with Todd. Daughter of rich folks who are splitting up; she’s the actual shop lifter of the group: clothes, makeup, anything appropriate for a little “princess.” Idea generator–usually bad ideas that gets them all in trouble.

There you have it. With a cast like this, we can’t help but to create a great story!

Author/Freelance Editor/Speaker (writing and editing topics).
View all posts by Linda W. Yezak →
This entry was posted in Writing. Bookmark the permalink.